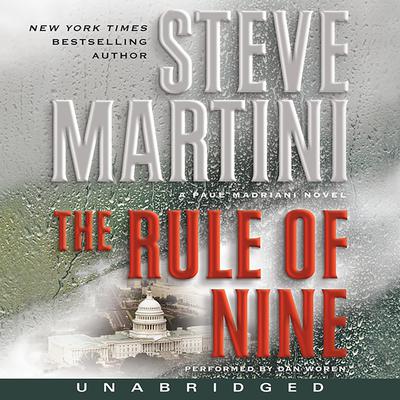 The Rule of Nine: A Paul Madriani Novel

Defense attorney Paul Madriani tracks an extremist hellbent on destroying the entire Supreme Court in one deadly stroke in this latest in the New York Times bestselling series.

San Diego defense attorney Paul Madriani is still reeling from the trauma of a near nuclear explosion he helped avert in Guardian of Lies, and has become more interested in larger, international dangers he sees on the horizon.

A former radical activist from the days of Vietnam and SDS, a man involved in bombings and localized terror as a youth, thinks the time has never been more ripe for change in the U.S. And he believes he has the perfect scheme for bringing that change about: the complete annihilation of a single branch of government.

Madriani becomes swept up in a race to save one third of the nation’s governing body, the Supreme Court, and puts his own life on the line in the process in this thrilling and provocative new novel.

Steve Martini was born in San Francisco and grew up in Southern California. An honors graduate of the University of California at Santa Cruz, he worked as a newspaper reporter in Los Angeles and as a correspondent at the California State Capitol in Sacramento, specializing in legal issues. After obtaining his law degree, he appeared in state and federal courts; he also served as special counsel to the California Victims of Violent Crime Program. His first novel, Compelling Evidence, was published in 1992 and became a bestseller. He has gone on to write a number of other books, including The Trader of Secrets, Guardian of Lies, The List, The Judge, and Prime Witness, among others. He currently resides in the Pacific Northwest.