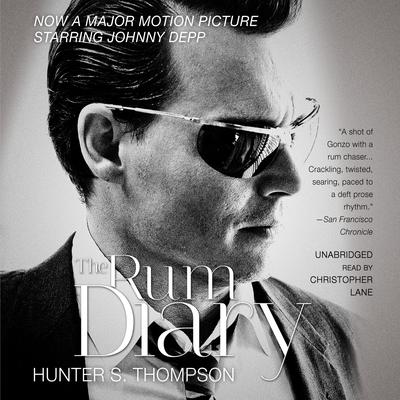 Begun in 1959 by a then twenty-two-year-old Hunter S. Thompson, The Rum Diary is a brilliantly tangled love story of jealousy, treachery, and violent alcoholic lust in the Caribbean boomtown that was San Juan, Puerto Rico, in the late 1950s.

The autobiographical hero, a young writer dreaming of Hemingway but stuck in a dead-end newspaper job, embarks on a carousing, hell-raising journey through the tropics. Along the way, he comes between a wild-spirited comrade and his temptress girlfriend and gets in the middle of a violent clash between the island culture and the encroaching American tourist values.

Exuberant and energetic, The Rum Diary is an outrageous, drunken romp in the spirit of Thompson’s bestselling Fear and Loathing in Las Vegas and Hell's Angels.

“Enough booze to float a yacht and enough fear and loathing to sink it.” —New York Daily News
“At the core of this hard-drinking, hard-talking, hard-living man is a moralist, a Puritan, even an innocent. The Rum Diary gives us this side of him without apology…with a kind of pride.” —Washington Post Book World
“Crackling, twisted, searing, paced to a deft prose rhythm…A shot of Gonzo with a rum chaser.” —San Francisco Chronicle
“A remarkably full and mature first novel...a languid and lovingly executed book that reveals its emotional depths slowly.” —Salon
“A great and an unexpected joy…reveals a young Hunter Thompson brimming with talent.” —Philadelphia Inquirer
“Christopher Lane’s relatively youthful but scratchy voice and his tone of petulance fit the teller of the story, Paul Kemp, who is already jaded in his early thirties.” —AudioFile
“Thompson has [created] a raging, grubbily poetic, and galvanic persona who reacts to all that is rotten in the world with a compelling mix of self-aggrandizement and self-destruction…[The Rum Diary reveals] the early stage of his particular form of myth-making and the emergence of his distinctive voice.” —Booklist