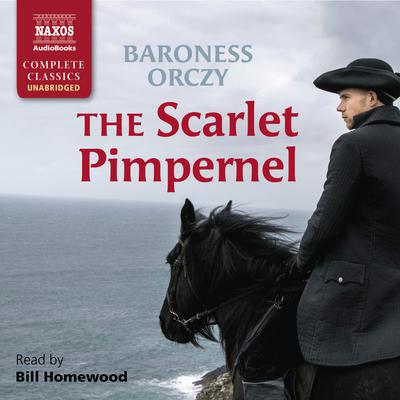 With the Reign of Terror at its peak, and the death toll mounting, France’s violent revolutionists suddenly find themselves frustrated by a mysterious vigilante. Known as the Scarlet Pimpernel, the enigmatic hero rescues the country’s ill-fated aristocrats from the doom of the guillotine and whisks them away to safety, with a band of gallant cohorts at his aid. Meanwhile, in England, beautiful Frenchwoman and former actress Lady Marguerite Blakeney finds herself drifting apart from her inane and foppish husband Sir Percy Blakeney – until Marguerite’s brother is found to be in league with the Pimpernel and the villainous Chauvelin blackmails her into discovering the true identity of the masked man…

“Listeners become immersed in the dramatic days of the French Revolution and the rush to save aristocrats by the League of the Scarlet Pimpernel. Through the narration of Bill Homewood, listeners will puzzle over the identity of the Scarlet Pimpernel, agonize with Marguerite over the fate of the brave hero, and worry about the evil plots of the villain Chauvelin. Though the story demonstrates some sexist views of women’s abilities and roles, for the most part, the 1905 work remains enjoyable for today’s audience. Further, through this outstanding audiobook, both unfamiliar listeners and those who have worn out their reading copies will experience the story in a special way. Winner of the AudioFile Earphones Award.” —AudioFile

The Hungarian-born Baroness Orczy (1865–1947) emigrated young with her affluent family to England and used her love of romance, mystery, disguise, and especially heroism to create many fictional popular characters. She is best known as the writer of The Scarlet Pimpernel—featuring the daring and mysterious savior of French aristocrats from the revolutionary guillotine.