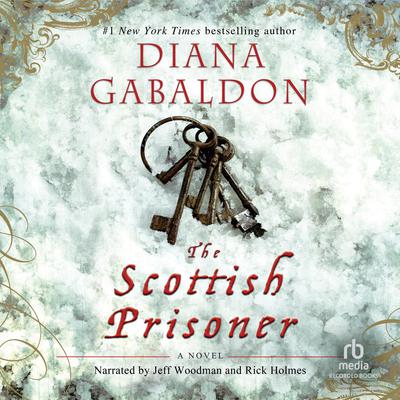 By Diana Gabaldon
Read by Jeff Woodman and Rick Holmes

Winner of the 2011 RT Award for Historical Fiction

In this highly-anticipated new novel, Diana Gabaldon brings back one of her most compelling characters: the unforgettable Lord John Grey - soldier, gentleman, and no mean hand with a blade. Set in the heart of the eighteenth century, Lord John's world is one of mystery and menace. Diana Gabaldon brilliantly weaves together the strands of Lord John's secret and public lives. Capturing the lonely, tormented, and courageous career of a man who fights for his crown, his honor, and his own secrets, Diana Gabaldon delivers breathtaking human drama, proving once again that she can bring history to life in a way few novelists ever have.

“Call it what you will—historical adventure, conspiracy thriller—it’s an engrossing story, masterfully paced, with exciting plot twists, swift reversals, and robust characterizations.” —Globe and Mail (Toronto)
“Capturing the lonely, tormented, and courageous career of a man who fights for his crown, his honor, and his own secrets, Gabaldon delivers breathtaking human drama, proving once again that she can bring history to life in a way few novelists ever have.” —Sheffield Star (England)
“A new Lord John story is always welcome, but one that features Jamie Fraser is a triumph. Gabaldon fills in parts of the [Outlander] series’ missing pieces and delivers a taut, suspenseful mystery that will captivate fans of both series. As her fans know, Gabaldon brilliantly combines strong characters, breathtaking historical events, epic escapades, and deception to create an unforgettable read.” —RT Book Reviews (4½ stars)
“Fraser embarks on a quest fraught with murder, espionage, and the dredging-up of potent secrets. A complicated plot will likely baffle new readers, but long-time Gabaldon fans will find plenty to love.” —Publishers Weekly
“When Lord John Grey reluctantly seeks Jamie’s assistance to clear the name of a friend and fellow officer and to bring the true criminal to justice, a classic case of strange bedfellows ensues. The strong chemistry between these two stalwart, yet supremely dissimilar, protagonists crackles as they travel to Ireland and face a daunting series of moral and physical obstacles and quandaries…Two supermen for the price of one—Gabaldon fans everywhere will be standing in line.” —Booklist
“A spirited return to the world first created in Outlander…This novel is, ultimately, an authentically fashioned historical mystery that allows the author to do what she does best: chronicle the lives of her characters with impeccable detail…Gabaldon fans, you’ll find much to delight in here.” —Library Journal
“As always, Gabaldon goes above and beyond…If you love historical fiction, this book could be a good entrance point into the Outlander world.” —Bookreporter
“There are the requisite villains, sneaky and dastardly, and good guys who are very good. But the author also has a nice, sometimes bawdy sense of humor…and some of the adult interactions in the story are very adult indeed…Fraser and the Greys are on hand for most of the action. A not strictly chronological but thoroughly entertaining entry in a franchise that shows no signs of running out of steam.” —Kirkus Reviews
“Long after the battle of Culloden in 1760, Jamie is a paroled prisoner in the remote Lake District of England, where he cares for Lord Dulsaney’s horses. Lord John Grey checks on the prisoners, including Jamie. Rick Holmes’s soft, musical voice delivers most of Jamie’s parts, defining him with a Scottish burr. Jeff Woodman portrays Grey with a crisp British accent. The alternating narration of the chapters is subtle even to the practiced listener, and each narrator handles the accents consistently. The portrayal of two-year-old Willie, Jamie’s secret illegitimate son, the ninth Earl of Ellesmere, is also well done. As Lord Grey and Jamie head off to Ireland in search of a Druid relic that could raise havoc between the island and Britain, the polished dual narration keeps the listener engaged.” —AudioFile