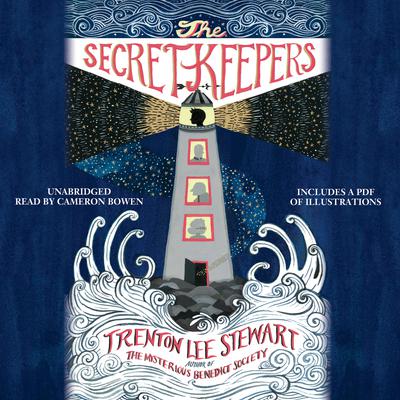 A Paste Magazine Pick of Audiobooks Perfect for the Whole Family

A Publishers Weekly Pick of the Week for September, 26, 2016

A 2016 Amazon Best Book for Children

An ALA Notable Book for Children

This heart-pounding mystery adventure, by the author of the New York Times bestselling series The Mysterious Benedict Society, is laced with magic and humor

A string of secrets

A race against time

When Reuben discovers an extraordinary antique watch, he soon learns it has a secret power and his life takes an intriguing turn. At first he is thrilled with his new treasure, but as one secret leads to another, Reuben finds himself torn between his innately honest nature and the lure to be a hero.

Now he is on a dangerous adventure--full of curious characters, treacherous traps, and hairsbreadth escapes--as he races to solve the mystery before it is too late. Even with fearless Penny, mighty Jack, and the wise Mrs. Genevieve on his side, can Reuben outwit and outmaneuver the sly villain called The Smoke and his devious defenders the Directions and save the city from a terrible fate?

In this ingeniously crafted novel, acclaimed New York Times bestselling author Trenton Lee Stewart invites readers to join the adventure, decipher the clues, and ask themselves the question: Is knowing a secret a gift or a curse?

Trenton Lee Stewart is the author of a novel for adults and the award-winning Mysterious Benedict Society series for children. He is a graduate of the Iowa Writers’ Workshop, and he teaches creative writing.