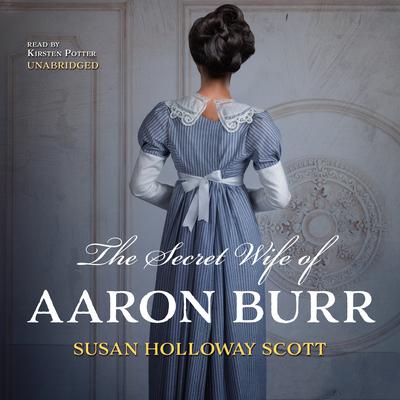 The Secret Wife of Aaron Burr

Eug├®nie Bearhani (1760–1835) was born in Calcutta, raised in Haiti, and brought as a servant—a free woman of color—to America by an English officer on the eve of the American Revolution. Yet none of that prepared Eug├®nie for her next employer: Colonel Aaron Burr, a man some whispered had made a pact with the devil.

The lines between master and servant soon tangle and blur, and first attraction becomes dangerous obsession. Many historians deny she even existed, but Eug├®nie and the children she bore to Burr were very real—and so was her little-known marriage to America's first true villain.

“Impressive research, details, and an unforgettable cast of characters lead by a woman of courage and spirit spark a story infused with heart. Highly recommended.” —Historical Novels Review
“Scott has created a memorable protagonist whose persistence and courage are often inspiring.” —Library Journal
“Scott’s deeply empathetic heroine is sure to keep readers hooked; both her inner strength and the strength of her relationships—such as the connection she has to her fellow enslaved people in India—elevate and anchor the story…A moving and vivid work of historical fiction.” —Publishers Weekly
“In a performance filled with restrained rage, Kirsten Potter portrays Via, a seven-year-old Tamil girl, the product of her mother’s rape by a British soldier, who is sold into slavery. Her final owner, Colonel Prevost, renames her Mary…Potter makes Mary’s helplessness and confused feelings toward Burr starkly real. She skillfully conveys the dangerous nature of the Mary/Burr relationship, in the process revealing the jealousies, duels, and double-dealings of our Founding Fathers.” —AudioFile

Susan Holloway Scott is the author of over fifty historical novels and historical romances. Writing under several pen names, she has earned numerous awards and honors.