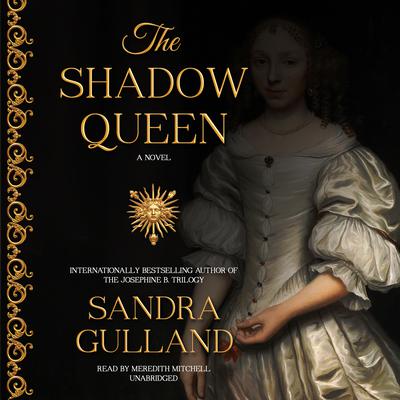 From the author of the beloved Josephine B. series comes a spellbinding historical novel about a young woman who rises to become the confidante to the most powerful, provocative, and dangerous woman in the seventeenth-century French Court: the mistress of the charismatic Sun King.

Paris, 1660. As the daughter of itinerant actors who once lit up the Parisian stages, Claudette always thought her future lay in the theater. But a series of chance encounters pulls her into the alluring orbit of the most beautiful woman in all of France: Ath├®na├»s de Montespan, the mistress to Louis XIV and reigning "Shadow Queen." Impetuous by nature, Ath├®na├»s wields a disconcerting amount of power—a fact that has ruffled many of the Sun King's key advisors.

Needing someone to act as her eyes and ears, Ath├®na├»s hires Claudette as a personal attendant. The young stagehand leaves the world of theater only to find that court is very much like a stage, with outward shows of loyalty masking more devious intentions. This parallel is not lost on Ath├®na├»s, who fears political enemies are plotting her ruin while young courtesans angle to take the coveted spot in the king's bed. Indeed, Claudette's supposedly respectable new position is marked by spying, rumormongering, illicit trysts, and titanic power struggles.

As Ath├®na├»s begins to lose her grip on the Sun King, her plots and fascination with the magical arts take a dark turn that makes Claudette question her allegiance to this mercurial figure—and puts the young maid's life in jeopardy. Set against the gilded opulence of a newly constructed Versailles and the blood-stained fields of the Franco-Dutch War, The Shadow Queen is a seductive, gripping novel about lust, power, loyalty, and the increasingly uneasy relationship between two strong-willed women whose actions could shape the future of France.

“The Shadow Queen is an epic feast for the senses with a cast of characters that includes Moliere, Racine, and the Sun King himself, Louis XIV. With this exhilarating exploration of the years of Louis’s reign, full of exquisite details and memorable characters, Sandra Gulland proves herself a master of not only storytelling but stagecraft and illusion, as well.” —Melanie Benjamin, New York Times bestselling author of The Aviator’s Wife
“Fascinating and rich in historical detail, The Shadow Queen brings Claudette des Oeillets to full and vivid life as she makes the journey from hungry, roaming player to indispensable attendant of Louis XIV’s mistress. A captivating glimpse into the theater, court life, and black arts of seventeenth-century Paris.” —Cathy Marie Buchanan, New York Times bestselling author of The Painted Girls
“Sandra Gulland’s latest will remind readers why they fall in love with the past. Gulland uses her meticulous research with consummate skill, rendering vivid the luxury and squalor of Louis XIV’s France and breathing life into fully formed characters that tug at the heart. Masterful.” —Tasha Alexander, New York Times bestselling author
“Sandra Gulland is at the top of her game in The Shadow Queen, and that’s saying a lot! From the first page you know you are in the hands of a master storyteller. I just don’t think anyone does it better than Gulland—this book is lyrical, fascinating, and seeped in history, drama, and emotion. Truly magnificent and an absolute joy to read.” —M. J. Rose, international bestselling author of The Book of Lost Fragrances
“Sandra Gulland is one of our most gifted historical novelists, and once again she does not disappoint. This vividly drawn tale of a young woman caught up in the dark intrigues of the beautiful, lethal mistress of the Sun King has all the ingredients readers love, blending passion, adventure, pageantry, and danger into a heady brew as intoxicating as it is unforgettable.” —C. W. Gortner, author of The Queen’s Vow
“A quick-paced, captivating tale of seventeenth-century France—from the dramas and destitutions of life in the theater, to the intrigues and ruthlessness of the royal court—and of the wrenching conflict between familial bonds and the sacrifices a young woman must make to survive and thrive. Through the trials and hard-earned triumphs of quick-witted Claudette, maid and confidante of aristocratic, alluring Athénaïs, Gulland shapes a world rich in historical detail and timeless in its exploration of divided loyalties, power struggles, and the consequences of remaining true to heartfelt ideals.” —Ania Szado, author of Studio Saint-Ex
“A must-read for anyone passionate about the theater and hungry for more of Sandra Gulland’s masterful depictions of life at the court of the Sun King.” —Anne Easter Smith, author of A Rose for the Crown
“Propelled by Sandra Gulland’s brilliant storytelling and her unerring gift for reviving a historical era through dramatic scenes, The Shadow Queen is told through a fascinating perspective—that of the personal attendant and closest confidante of Louis XIV’s all-powerful mistress. The story straddles two worlds—the competitive arena of seventeenth-century French theater and the opulent yet treacherous court of the Sun King. The characters are magnetic and the pace will dazzle you.” —Adrienne McDonnell, author of The Doctor and the Diva

Sandra Gulland is the author of the Josephine B. trilogy, which has sold over a million copies worldwide and is being developed into a television miniseries. Prior to writing full time she was a book editor in Toronto.