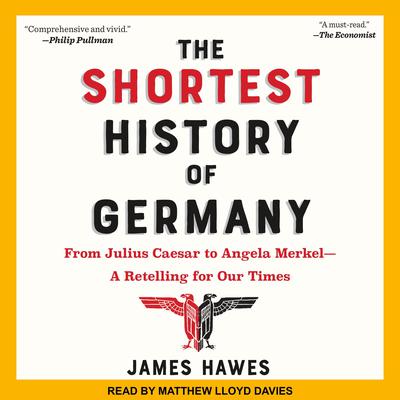 The Shortest History of Germany: From Julius Caesar to Angela Merkel-A Retelling for Our Times

2,000 YEARS OF HISTORY IN ONE RIVETING AFTERNOON

A country both admired and feared, Germany has been the epicenter of world events time and again: the Reformation, both World Wars, the fall of the Berlin Wall. It did not emerge as a modern nation until 1871—yet today, Germany is the world's fourth-largest economy and a standard-bearer of liberal democracy.

"There’s no point studying the past unless it sheds some light on the present," writes James Hawes in this brilliantly concise history that has already captivated hundreds of thousands of readers. "It is time, now more than ever, for us all to understand the real history of Germany."

An excellent little book . . . [Hawes] has a sense of humour, and a sharp eye for similarities between then and now. —The Spectator

James Hawes is the author of A White Merc With Fins, Rancid Aluminium, Dead Long Enough, White Powder, Green Light, My Little Armalite, and Englanders and Huns: how fifty years of enmity led to the First World War. In 2008, James Hawes also started as senior lecturer in Creative Writing at Oxford Brookes University. In 2012 he was promoted to Reader.