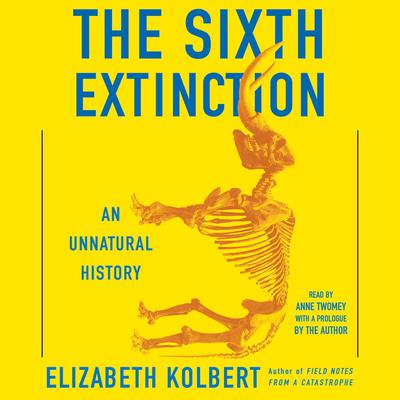 The Sixth Extinction: An Unnatural History

Winner of the 2015 Pulitzer Prize for General Nonfiction

A Literary Hub Pick of Best Books of the Decade

Finalist for the 2016 Kirkus Prize

One of Audible’s Best Audiobooks of 2014: Science and Technology

A Publishers Weekly Pick of the Week, February 2014

WINNER OF THE PULITZER PRIZE
From the author of Field Notes from a Catastrophe, a powerful and important work about the future of the world, blending intellectual and natural history and field reporting into a compelling account of the mass extinction unfolding before our eyes.

Over the last half a billion years, there have been five mass extinctions, when the diversity of life on earth suddenly and dramatically contracted. Scientists around the world are currently monitoring the sixth extinction, predicted to be the most devastating extinction event since the asteroid impact that wiped out the dinosaurs. This time around, the cataclysm is us.

The Sixth Extinction draws on the work of scores of researchers in half a dozen disciplines–geologists who study deep ocean cores, botanists who follow the tree line as it climbs up the Andes, and marine biologists who dive off the Great Barrier Reef. Elizabeth Kolbert, two-time winner of the National Magazine Award and New Yorker writer, accompanies many of these researchers into the field, and introduces you to a dozen species–some already gone, others facing extinction–that are being affected by the sixth extinction.

Through these stories, Kolbert provides a moving account of the disappearances occurring all around us and traces the evolution of extinction as concept, from its first articulation by Georges Cuvier in revolutionary Paris up through the present day. The sixth extinction is likely to be mankind's most lasting legacy; as Kolbert observes, it compels us to rethink the fundamental question of what it means to be human.

“Her extensive travels in researching this book and her insightful treatment of both the history and the science all combine to make The Sixth Extinction an invaluable contribution to our understanding of present circumstances, just as the paradigm shift she calls for is sorely needed.” —New York Times Book Review
“What’s exceptional about Kolbert’s writing is the combination of scientific rigor and wry humor that keeps you turning the pages.” —National Geographic
"[Kolbert] grounds her stories in rigorous science and memorable characters past and present, building a case that a mass extinction is underway, whether we want to admit it or not.” —Discover magazine
“A fascinating and frightening excursion into how humans are bringing about their own demise…The Sixth Extinction is a bold and at times desperate attempt to awaken us to this responsibility.” —Washington Post
“Surprisingly breezy, entirely engrossing, and frequently entertaining…Kolbert is a masterful, thought-provoking reporter.” —Boston Globe
“Thorough and fascinating…Kolbert is an economical and deft explainer of the technical and about as intrepid a reporter as they come…Her reporting is meticulous.” —Harper’s
“Superbly blends the depressing facts associated with rampant species extinctions and impending ecosystem collapse with stellar writing to produce a text that is accessible, witty, scientifically accurate, and impossible to put down.” —Publishers Weekly (starred review)
“A deft examination of the startling losses of the sixth mass extinction occurring at this moment and the sobering, underlying cause: humans…A highly significant eye-opener.” —Kirkus Reviews (starred review)
“Rendered with rare, resolute, and resounding clarity, Kolbert’s compelling and enlightening report forthrightly addresses the most significant topic of our lives.” —Booklist (starred review)
“Powerful…Kolbert expertly traces the ‘twisting’ intellectual history of how we’ve come to understand the concept of extinction and, more recently, how we’ve come to recognize our role in it…An invaluable contribution to our understanding of present circumstances.” —Al Gore
“Elizabeth Kolbert writes with an aching beauty of the impact of our species on all the other forms of life known in this cold universe. The perspective is at once awe-inspiring, humbling, and deeply necessary.” —T. C. Boyle, New York Times bestselling author
“An epic, riveting story of our species that reads like a scientific thriller—only more terrifying because it is real. Like Rachel Carson’s Silent Spring, Elizabeth Kolbert’s The Sixth Extinction is destined to become one of the most important and defining books of our time.” —David Grann, New York Times bestselling author

Elizabeth Kolbert is a journalist and author best known for her New York Times bestseller The Sixth Extinction. She received the American Association for the Advancement of Science’s magazine writing award for the New Yorker series on which this book is based. A former New York Times reporter, she is now well known as an observer and commentator on environmentalism for the New Yorker.