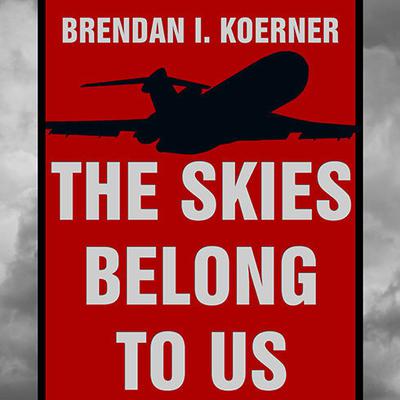 The Skies Belong to Us: Love and Terror in the Golden Age of Hijacking

By Brendan I. Koerner
Read by Rob Shapiro

In an America torn apart by the Vietnam War and the demise of the idealism of the sixties, airplane hijackings were astonishingly routine. Over a five-year period starting in 1968, the desperate and disillusioned seized commercial jets nearly once a week, using guns, bombs, and jars of acid. Some hijackers wished to escape to foreign lands, where they imagined being hailed as heroes; others aimed to swap hostages for sacks of cash. Their criminal exploits mesmerized the country, never more so than when the young lovers at the heart of Brendan I. Koerner's The Skies Belong to Us pulled off the longest-distance hijacking in American history. A shattered Army veteran and a mischievous party girl, Roger Holder and Cathy Kerkow commandeered Western Airlines Flight 701 as a vague protest against the war. Through a combination of savvy and dumb luck, the couple managed to flee across an ocean with a half-million dollars in ransom, a feat that made them notorious around the globe. Koerner spent four years chronicling this madcap tale, which involves a cast of characters ranging from exiled Black Panthers to African despots to French movie stars. He combed through over 4,000 declassified documents and interviewed scores of key figures in the drama—including one of the hijackers, whom Koerner discovered living in total obscurity. Yet The Skies Belong to Us is more than just an enthralling yarn about a spectacular heist and its bittersweet, decades-long aftermath. It is also a psychological portrait of America at its most turbulent and a testament to the madness that can grip a nation when politics fail.

Gripping. . . . A fascinating look at the history of skyjacking. The odyssey of Holder's life before and after his act of terror, aided by his lover, Cathy Kerkow, makes for a compelling [listen]. —Publishers Weekly
“Such pure pop storytelling that reading it is like hearing the best song of summer squirt out of the radio. Both the author and his subjects are so audacious that they frequently made me laugh out loud.” —New York Times
“This material, naturally a great yarn, is handled exceedingly well…Koerner has a rare empathy, and by acknowledging the fullness of [this] strange story, he suggests a deeper truth about the nature of extremism.” —New York Times Book Review
“Brilliantly evoking the atmosphere of the era with its bubbling racial tensions, Vietnam War disillusionment, and marijuana fog, The Skies Belong to Us weaves a vivid retelling of America’s longest-distance hijacking and its globe-spanning, stranger-than-fiction aftermath with the history of this most mediagenic of crimes…As The Skies Belong to Us so entertainingly and insightfully demonstrates, even a recent historical era can seem not merely like a different time, but like a different planet.” —Daily Beast
“The free-wheeling, hijacking-crazy days of the 1960s and early ’70s come to life vividly in Brendan I. Koerner’s evocative new page-turner The Skies Belong to Us: Love and Terror in the Golden Age of Hijacking. With abundant research and a sharp eye for the absurd, Koerner transports us to a time long before anyone thought of crashing planes into buildings, when people took over airplanes for all sorts of weird reasons that were only occasionally political.” —Los Angeles Times
“Skillfully re-creates this tumultuous era…An impressive job of research that includes interview with many of the central players in the drama…A gripping portrait of a chaotic time.” —Washington Post

Brendan I. Koerner is a contributing editor at Wired magazine and the author of Now the Hell Will Start.