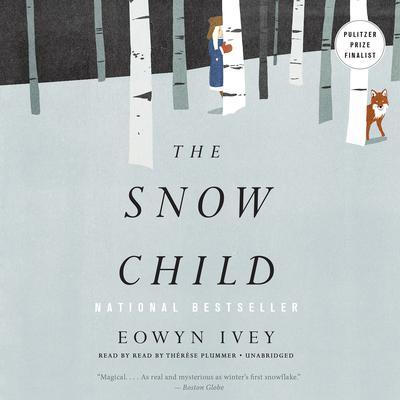 The Snow Child: A Novel

Finalist for the 2013 Pulitzer Prize for Fiction

In this magical debut -- a finalist for the Pulitzer Prize -- a couple's lives are changed forever by the arrival of a little girl, wild and secretive, on their snowy doorstep.


Alaska, 1920: a brutal place to homestead, and especially tough for recent arrivals Jack and Mabel. Childless, they are drifting apart--he breaking under the weight of the work of the farm; she crumbling from loneliness and despair. In a moment of levity during the season's first snowfall, they build a child out of snow. The next morning the snow child is gone--but they glimpse a young, blonde-haired girl running through the trees.

This little girl, who calls herself Faina, seems to be a child of the woods. She hunts with a red fox at her side, skims lightly across the snow, and somehow survives alone in the Alaskan wilderness. As Jack and Mabel struggle to understand this child who could have stepped from the pages of a fairy tale, they come to love her as their own daughter. But in this beautiful, violent place things are rarely as they appear, and what they eventually learn about Faina will transform all of them.

“If Willa Cather and Gabriel Garcia Marquez had collaborated on a book, The Snow Child would be it. It is a remarkable accomplishment.” —Robert Goolrick, New York Times bestselling author
“A magical yet brutally realistic tale.” —O, The Oprah Magazine
This book is real magic, shot through from cover to cover with the cold, wild beauty of the Alaskan frontier. Eowyn Ivey writes with all the captivating delicacy of the snowfalls she so beautifully describes. —Ali Shaw, author of The Girl with Glass Feet
“Captivating.” —San Francisco Chronicle
“Long winters come alive in Ivey’s novel about 1920s-era homesteaders in Alaska.” —New York Times
“Ivey sets up the two most powerful forces in any story: fear on the one hand, potential for the miraculous on the other.” —Newsday
Magical, yes, but THE SNOW CHILD is also satisfyingly realistic in its depiction of 1920s homestead-era Alaska and the people who settled there, including an older couple bound together by resilient love. Eowyn Ivey's poignant debut novel grabbed me from the very first pages and made me wish we had more genre-defying Alaska novels like this one. Inspired by a fairy tale, it nonetheless contains more depth and truth than so many books set in this land of extremes. —Andromeda Romano-Lax, author of The Spanish Bow
“Ivey’s prose brings the chilly northern wilderness to life.” —Bookseller
A transporting tale . . . an amazing achievement. —Sena Jeter Naslund, New York Times bestselling author of Ahab's Wife
THE SNOW CHILD is a vivid story of isolation and hope on the Alaska frontier, a narrative of struggle with the elements and the elemental conflict between one's inner demons and dreams, and the miracle of human connection and community in a spectacular, dangerous world. You will not soon forget this story of learning to accept the gifts that fate and love can bring." —Robert Morgan, author of Gap Creek —
Eowyn Ivey's exquisite debut transports the reader away to a world almost out of time, into a fairytale destined to both chill and delight. Her portrayal of an untamed Alaska is so detailed you can feel the snowflakes on your own eyelashes, even as her characters' desperate quest for, and ultimate redemption by, love will warm your heart. —Melanie Benjamin, author of Alice I Have Been
“Enchanting from beginning to end…As fresh as the season’s first snow. Simply lovely.” —Keith Donohue, author of The Motion of Puppets
“A transporting tale…An amazing achievement.” —Sena Jeter Naslund, author of Ahab’s Wife

Eowyn Ivey is the author of To the Bright Edge of the World and The Snow Child, her debut novel. The Snow Child, was a finalist for the Pulitzer Prize and an international bestseller published in twenty-six languages. Ivey earned her BA in journalism and creative writing from Western Washington University and studied creative nonfiction at the University of Alaska. She is a founding member of 49 Writers, Alaska’s first statewide writing center, and lives in her native Alaska with her husband and two daughters.