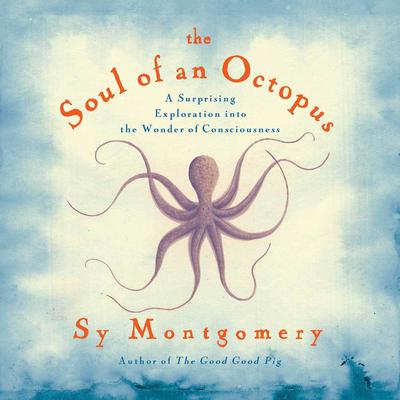 The Soul of an Octopus: A Surprising Exploration into the Wonder of Consciousness

Winner of the 2016 New England Book Award for Nonfiction

A Amazon Best Books of the Year Selection for Sports & Outdoors

An American Library Association Best Book of the Year

In this astonishing book, New York Times bestselling author Sy Montgomery explores the emotional and physical world of the octopus—a surprisingly complex, intelligent, and spirited creature—and the remarkable connections it makes with humans.

Sy Montgomery’s popular Orion magazine article, “Deep Intellect,” about her friendship with a sensitive, sweet-natured octopus named Athena and the grief she felt at her death, went viral, indicating the widespread fascination with these mysterious, almost alien-like creatures. Since then Sy has practiced true immersion journalism, from New England aquarium tanks to the reefs of French Polynesia and the Gulf of Mexico, pursuing these wild, solitary shape-shifters.

Octopuses have varied personalities and intelligence they show in myriad ways: endless trickery to escape enclosures and get food; jetting water playfully to bounce objects like balls; and evading caretakers by using a scoop net as a trampoline and running around the floor on eight arms. But with a beak like a parrot, venom like a snake, and a tongue covered with teeth, how can such a being know anything? And what sort of thoughts could it think?

The intelligence of dogs, birds, and chimpanzees was only recently accepted by scientists, who now are establishing the intelligence of the octopus, watching them solve problems and deciphering the meaning of their color-changing camouflage techniques.

Montgomery chronicles this growing appreciation of the octopus, but also tells a love story. By turns funny, entertaining, touching, and profound, The Soul of an Octopus reveals what octopuses can teach us about consciousness and the meeting of two very different minds.

“Delightful.” —Nature
“Charming and moving…with extraordinary scientific research.” —The Guardian (London)
“[Montgomery’s] compassion and respect for the species make for a buoying read.” —Newsday
“An engaging work of natural science…There is clearly something about the octopus’s weird beauty that fires the imaginations of explorers, scientists, writers.” —Daily Mail (London)
“Fascinating…touching…informative…Entertaining books like The Soul of an Octopus remind us of just how much we not only have to learn from fellow creatures, but that they can have a positive impact on our lives. " —Daily Beast
“A fascinating glimpse into an alien consciousness.” —Kirkus Reviews
“Inspired by both rigorous scientific curiosity and enraptured wonder and empathy…She also tells funny and moving stories.” —Booklist (starred review)
“Enter the mysterious intelligent alien world of the octopus. Experience a real intelligence based on a sense of touch that humans can barely imagine.” —Temple Grandin, New York Times bestselling author

Sy Montgomery is a naturalist, documentary scriptwriter, and author of twenty acclaimed books of nonfiction for adults and children, including the National Book Award finalist The Soul of an Octopus and How to Be a Good Creature, a New York Times bestseller. She is the recipient of numerous honors, including lifetime achievement awards from the Humane Society and the New England Booksellers Association.