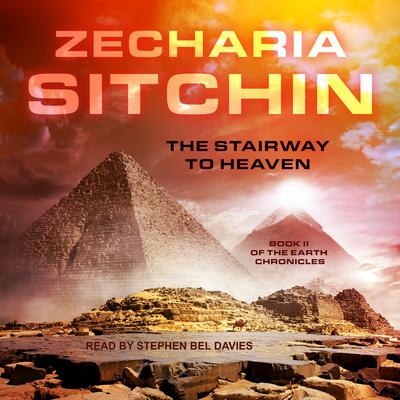 The Stairway to Heaven

Since earliest times, human beings have pondered the incomprehensible questions of the universe, life . . . and the afterlife. Where did mortal man go to join the immortal Gods? Was the immense and complex structure at Giza an Egyptian Pharaoh's portal to immortality? Or a pulsating beacon built by extraterrestrials for landing on Earth?

In this second volume of his trailblazing series The Earth Chronicles, Zecharia Sitchin unveils secrets of the pyramids and hidden clues from ancient times to reveal a grand forgery on which established Egyptology is founded, and takes the listener to the Spaceport and Landing Place of the Anunnaki gods—"Those Who from Heaven to Earth Came."

A dazzling performance . . . Sitchin is a zealous investigator. —Kirkus

Zecharia Sitchin (1920-2010), an eminent Orientalist and biblical scholar, was born in Russia and grew up in Palestine, where he acquired a profound knowledge of modern and ancient Hebrew, other Semitic and European languages, the Old Testament, and the history and archaeology of the Near East. A graduate of the University of London with a degree in economic history, he worked as a journalist and editor in Israel for many years prior to undertaking his life’s work-the Earth Chronicles. One of the few scholars able to read the clay tablets and interpret ancient Sumerian and Akkadian, Sitchin based the Earth Chronicles series on the texts and pictorial evidence recorded by the ancient civilizations of the Near East. His books have been widely translated, reprinted in paperback editions, converted to Braille for the blind, and featured on radio and television programs.