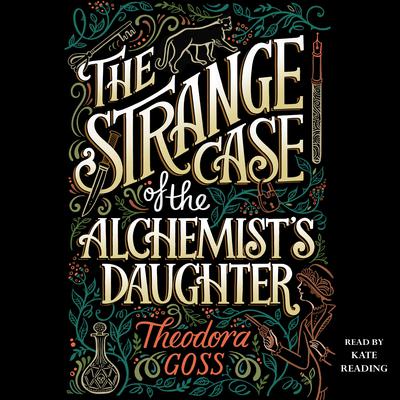 The Strange Case of the Alchemist's Daughter

The Extraordinary Adventures of the Athena Club Series: Book 1

The 2018 Audie Award Winner for Best Narration in Fantasy

Nominated for the 2017 Nebula Award for Best Novel

Finalist for the 2018 World Fantasy Award for Best Novel

Based on some of literature’s horror and science fiction classics, this is the story of a remarkable group of women who come together to solve the mystery of a series of gruesome murders—and the bigger mystery of their own origins.

Mary Jekyll, alone and penniless following her parents’ death, is curious about the secrets of her father’s mysterious past. One clue in particular hints that Edward Hyde, her father’s former friend and a murderer, may be nearby, and there is a reward for information leading to his capture…a reward that would solve all of her immediate financial woes.

But her hunt leads her to Hyde’s daughter, Diana, a feral child left to be raised by nuns. With the assistance of Sherlock Holmes and Dr. Watson, Mary continues her search for the elusive Hyde, and soon befriends more women, all of whom have been created through terrifying experimentation: Beatrice Rappaccini, Catherin Moreau, and Justine Frankenstein.

When their investigations lead them to the discovery of a secret society of immoral and power-crazed scientists, the horrors of their past return. Now it is up to the monsters to finally triumph over the monstrous.

“A tour de force of reclaiming the narrative, executed with impressive wit and insight.” —Publishers Weekly (starred review)
“They are just as much fun as their fictional fathers, and like the League of Extraordinary Gentlemen, their talents play off against one other, anchored by Mary, the most normal of them: prudent, thrifty, genteel, her father’s revolver loaded and ready.” —Wall Street Journal
“A swiftly paced, immaculately plotted mystery full of winning characters you always thought you knew, as well as ones you would never have imagined.” —NPR
“Goss skillfully balances the revisionist feminist themes with a crackling conspiracy adventure and a colorful portrait of Victorian London.” —Chicago Tribune
“Narrator Kate Reading voices an extraordinary group of women in this wonderful romp, which takes its inspiration from the best of Victorian gothic and science fiction. Bravo to Reading for keeping the women’s voices understated and resisting caricatures…The narrative is interspersed with warm interjections and gentle bickering from the women as they collaborate to tell their story, giving Reading much to work with…It’s lively and exciting.” —AudioFile

Theodora Goss is the World Fantasy Award–winning author of many publications. She has been a finalist for the Nebula, Locus, Crawford, Seiun, and Mythopoeic Awards, as well as on the Tiptree Award Honor List. Her work includes the short-story collection In the Forest of Forgetting; Interfictions, a short-story anthology coedited with Delia Sherman; Voices from Fairyland, a poetry anthology with critical essays and a selection of her own poems; The Thorn and the Blossom, a novella in a two-sided accordion format; and the poetry collection Songs for Ophelia. She teaches literature and writing at Boston University and in the Stonecoast MFA Program.