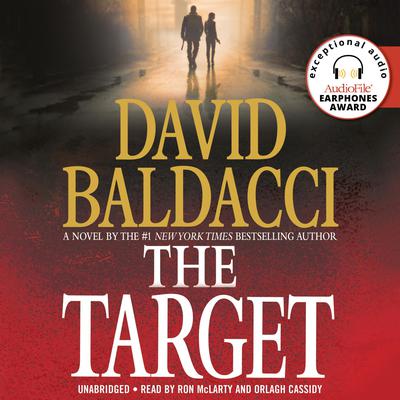 By David Baldacci
Read by Ron McLarty and Orlagh Cassidy

The Will Robie Series: Book 3

One of Barnes & Noble's Biggest Books for April 2014

The President knows it's a perilous, high-risk assignment. If he gives the order, he has the opportunity to take down a global menace, once and for all. If the mission fails, he would face certain impeachment, and the threats against the nation would multiply. So the president turns to the one team that can pull off the impossible: Will Robie and his partner, Jessica Reel.

Together, Robie and Reel's talents as assassins are unmatched. But there are some in power who don't trust the pair. They doubt their willingness to follow orders. And they will do anything to see that the two assassins succeed, but that they do not survive.

As they prepare for their mission, Reel faces a personal crisis that could well lead old enemies right to her doorstep, resurrecting the ghosts of her earlier life and bringing stark danger to all those close to her. And all the while, Robie and Reel are stalked by a new adversary: an unknown and unlikely assassin, a woman who has trained her entire life to kill, and who has her own list of targets--a list that includes Will Robie and Jessica Reel.

The Innocent is Baldacci at his absolute best...Baldacci provides the reader a non-stop pulse pounding ride that will keep you on the edge of your seat into the wee hours of the morning...Five Stars. —Examiner.com
This book is a definite one-day, 'edge-of-your-chair' read, with an ending that is a complete surprise. One of the best Baldacci's since Absolute Power, this is one that will have all suspense readers enthralled. —Suspense Magazine on The Innocent
Readers expect excitement and intrigue in David Baldacci's books, and Zero Day is no exception...As Baldacci's new hero narrowly escapes countless close calls, the pairing of the author's imagination and knowledge create a wild ride for the reader. Puller is gutsy, brash and likable. Best of all, he survives to reappear in the next book of this new series. —The Free-Lance Star on Zero Day
Zero Day is a nifty, paranoid thriller disguised as a murder mystery, and Baldacci advances it at a speedy clip with a nice mix of intrigue, tantalizing clues and the occasional explosion...Baldacci's books are fast-paced battles between good and evil. —Richmond Times Dispatch on Zero Day
Baldacci is a master when it comes to writing about small-town conspiracies and a lone hero who fights against all odds to clean up corruption. The narrative moves slowly, so the reader has a chance to solve the case along with Puller. It might seem straightforward, but the final reveal will surprise even hardcore thriller junkies. —The Washington Post on The Forgotten
Another fast paced page turner that will keep you glued to the couch...by an author who continues to standout in the increasingly crowded thriller field. —Examiner.com on The Forgotten
“The assassination must be both successful and untraceable. Anything less would bring the president down and endanger the nation. To complete the mission, this meticulous chief executive turns to a team that he believes is unassailable: Will Robie and Jessica Reel. But this masterful pair has enemies, some of whom are dedicated to making this their very last assignment. David Baldacci’s The Target holds multiple layers of suspense and plot surprises.” —Barnes&Noble.com, editorial review
“In unsparing detail, Baldacci depicts the brutal conditions in the North Korean camp, in particular their impact on twenty-five-year-old Yie Chung-Cha, a prisoner groomed as a deadly assassin.” —Publishers Weekly
“Baldacci picks up where he left off with CIA assassins Will Robie and Jessica Reel in this no-holds-barred tale of perfidy and murder at the highest level…Robie and Reel fans will thrill to see their favorite spies back in action.” —Kirkus Reviews
“Ron McLarty and Orlagh Cassidy are a great team of narrators in this lightning-paced thriller. More exciting adventures and plenty of violence are in store for trained assassins Will Robie and his partner, Jessica Reel, even though some doubt their ability to follow orders. McLarty’s performance is heartfelt and empathetic, and Cassidy’s warm, low voice takes the hard edge off of Jessica’s character. Cassidy’s use of pacing and accents adds both drama and character to the wide variety of other female characters, including North Korean Min, who is ten years old, and her savior, Comrade Yie. Together, the narrators pull the listener into the plot’s many twists and turns. Winner of an AudioFile Earphones Award.” —AudioFile