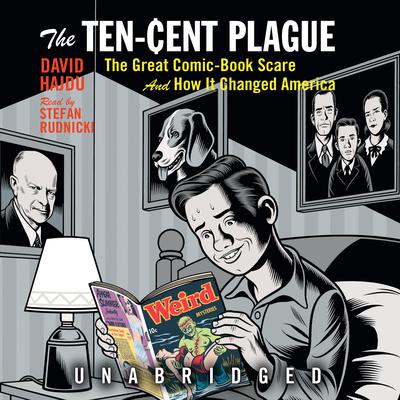 The Ten-Cent Plague: The Great Comic-Book Scare and How It Changed America

In the years between World War II and the emergence of television as a mass medium, American popular culture as we know it was first created in the bold, pulpy pages of comic books. The Ten-Cent Plague explores this cultural emergence and its fierce backlash while challenging common notions of the divide between “high” and “low” art.

David Hajdu reveals how comics, years before the rock-and-roll revolution, brought on a clash between postwar children and their prewar parents. Created by outsiders from the tenements, garish, shameless, and often shocking, comics became the targets of a raging generational culture divide. They were burned in public bonfires, outlawed in certain cities, and nearly destroyed by a series of televised Congressional hearings. Yet their creativity, irreverence, and suspicion of authority would have a lasting influence.

“Incisive and entertaining…This book tells an amazing story, with thrills and chills more extreme than the workings of a comic book’s imagination.” —New York Times
“To those who think rock ’n’ roll created the postwar generation gap, David Hajdu says: Think again. Every page of The Ten-Cent Plague evinces [Hajdu’s] zest for the ‘aesthetic lawlessness’ of comic books and his sympathetic respect for the people who made them. Comic books have grown up, but Hajdu’s affectionate portrait of their rowdy adolescence will make readers hope they never lose their impudent edge.” —Chicago Tribune
“Sharp…lively…entertaining and erudite…David Hajdu offers captivating insights into America’s early bluestocking-versus-blue-collar culture wars, and the later tensions between wary parents and the first generation of kids with buying power to mold mass entertainment.” —Village Voice
“A compelling story of the pride, prejudice, and paranoia that marred the reception of mass entertainment in the first half of the century.” —Times Literary Supplement (London)
“A vivid and engaging book.” —New Yorker
“David Hajdu, who perfectly detailed the Dylan-era Greenwhich Village scene in Positively 4th Street, does the same for the birth and near death (McCarthyism!) of comic books in The Ten-Cent Plague.” —GQ
“Marvelous…A staggeringly well-reported account of the men and women who created the comic book, and the backlash of the 1950s that nearly destroyed it…Hajdu’s important book dramatizes an early, long-forgotten skirmish in the culture wars that, half a century later, continues to roil.” —Entertainment Weekly (Grade: A-)
“I’ve been waiting for a book like David Hajdu’s The Ten-Cent Plague to come along…Anyone who remembers Positively 4th Street will recognize in this new book Hajdu’s peerless ability to weave first-person recollections with an acute perspective of America at a pivotal moment in its cultural timeline. The rise of comics as a mode of expression, an outlet for entertainment, and, rather tragicomically, as a target for censorship, couldn’t be more compelling in anyone else’s hands. In deft narrative strokes Hajdu creates a colorful, character-driven story of our first real—and lasting—counterculture (if the burgeoning popularity of graphic novels is any indication) and shows why we embrace it still.” —Amazon.com Review, Amazon Significant Seven, March 2008
“The Ten-Cent Plague is about the best account yet of comics in America, an instant classic of cultural history.” —Geoffrey O’Brien, editor, Library of America
“The main attraction—EC Comics publisher Bill Gaines’s attempt to explain in a Senate committee hearing how an illustration of a man holding a severed head could be in good taste—holds all the dramatic power it has acquired as it’s been told among fans over the past half-century.” —Publishers Weekly (starred review)
“Thanks to narrator Stefan Rudnicki, other books on the history of comic books can’t even touch The Ten-Cent Plague. Rudnicki’s steely narration of the Great Comic Book Scare of 1953–54 will raise the hackles of any freethinking American…The book is outstanding, even for those who don’t love comic books.” —AudioFile

David Hajdu is the author of Lush Life and Positively 4th Street. He lives in Manhattan and writes for the New York Times Magazine, Vanity Fair, New Republic, and New York Review of Books.