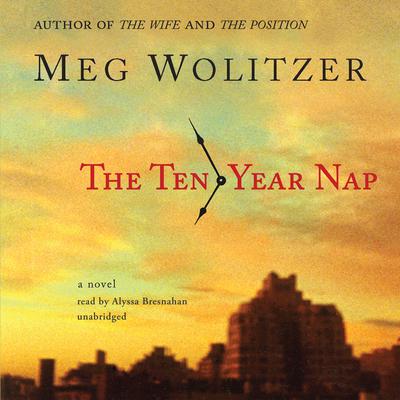 For a group of four New York friends, the past decade has been largely defined by marriage and motherhood. Educated and reared to believe that they would conquer the world, they then left prestigious jobs to stay home with their babies. What was meant to be a temporary leave of absence has lasted a decade. Now, at age forty, with the halcyon days of young motherhood behind them and without professions to define them, Amy, Jill, Roberta, and Karen face a life that is not what they were brought up to expect but seems to be the one they have chosen. But when Amy meets someone who seems to have fulfilled the classic women's dream of having it all—work, love, family—without having to give anything up, a lifetime's worth of concerns, both practical and existential, opens up. As her obsession with this woman's bustling life grows, it forces the four friends to confront the choices they've made—until a series of startling events shatters the peace and, for some of them, changes the landscape entirely.

“In The Ten-Year Nap, Meg Wolitzer uses her trademark wit and intelligence to animate questions more often posed by nonfiction: Why are many women tempted to stop working after having children? What do they gain—and lose—by doing so? The result is both a complex portrait of contemporary motherhood and an arresting dispatch from the family frontlines.” —Jennifer Egan, Pulitzer Prize–winning author of A Visit from the Goon Squad
“The tartly funny Wolitzer is a miniaturist who can nail a contemporary type, scene, or artifact with deadeye accuracy.” —New York Times Book Review
“Brisk and moving…Whatever you opt for, something gets cheated. That’s what’s known as the human condition. The ultimate peril is motherhood, loving someone more than you love yourself. Meg Wolitzer nails it with tenderness and wit.” —O, The Oprah Magazine
“Wolitzer’s middle-aged moms are flawed: selfish, neurotic, and occasionally petty. But they—and their conflicts—feel vividly satisfyingly real.” —Entertainment Weekly
“An engrossing, juicy read about girlfriends, marriages, jealousies, and money.” —Salon
“Able to nail an era or emotion, snack, or sexual position with deadpan accuracy, [Wolitzer’s] the kind of writer who leaves you gulping with recognition. The well-maneuvered cast of minor characters—from schlepping husbands to anorexic single mothers—add another layer of complexity to an already rich feast.” —Independent (London)
“It’s a rare novelist who can transform domestic fiction into a sustained, smart, and funny inquiry into the price of ambition, the value of work, issues of class, and the meaning of motherhood—Wolitzer is that novelist.” —Booklist
“Wise, witty…A perceptive, highly pleasurable novel that serves as Wolitzer’s up-to-date answer to the old question: ‘What do women want?’” —Kirkus Reviews (starred review)