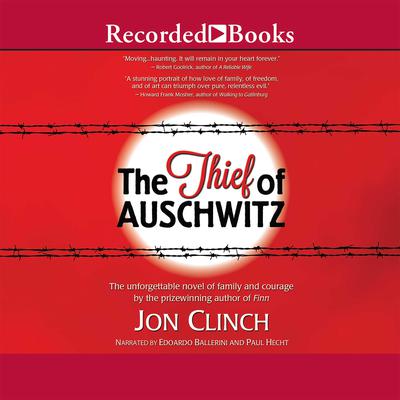 The Thief of Auschwitz

By Jon Clinch
Read by Edoardo Ballerini and Paul Hecht

The camp at Auschwitz took one year of my life, and of my own free will I gave it another four." So begins the much-anticipated new novel from Jon Clinch, award-winning author of Finn and Kings of the Earth. In The Thief of Auschwitz, Clinch steps for the first time beyond the deeply American roots of his earlier books to explore one of the darkest moments in mankind' s history-- and to do so with the sympathy, vision, and heart that are the hallmarks of his work Told in two intertwining narratives, The Thief of Auschwitz takes readers on a dual journey: one into the death camp at Auschwitz with Jacob, Eidel, Max, and Lydia Rosen; the other into the heart of Max himself, now an aged but extremely vital-- and outspoken-- survivor. Max is a renowned painter, and he' s about to be honored with a retrospective at the National Gallery in Washington. The truth, though, is that he' s been keeping a crucial secret from the art world-- indeed from the world at large, and perhaps even from himself-- all his life long. The Thief of Auschwitz reveals that secret, along with others that lie in the heart of a family that' s called upon to endure-- together and separately-- the unendurable.

Jon Clinch is the author of several novels, including his debut, Finn, which was named an American Library Association Notable Book and was chosen as one of the year’s best books by the Washington Post, the Chicago Tribune, and the Christian Science Monitor. It also won the Philadelphia Athenaeum Literary Award and was shortlisted for the Center for Fiction’s First Novel Prize. His second novel, Kings of the Earth, was named a best book of the year by the Washington Post and led the 2010 Summer Reading List at O, The Oprah Magazine. In 2008, he organized a benefit reading for the financially ailing Twain House, an event that literally saved the house from bankruptcy.