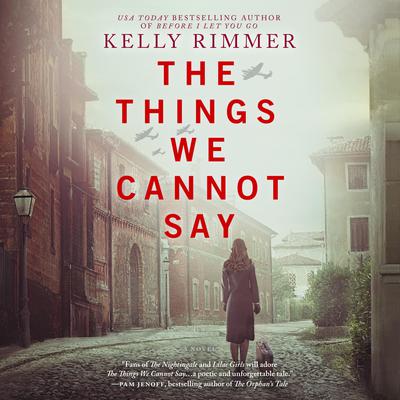 The Things We Cannot Say

In 1942, Europe remains in the relentless grip of war. Just beyond the tents of the Russian refugee camp she calls home, a young woman speaks her wedding vows. It’s a decision that will alter her destiny…and it’s a lie that will remain buried until the next century.

Since she was nine years old, Alina Dziak knew she would marry her best friend, Tomasz. Now fifteen and engaged, Alina is unconcerned by reports of Nazi soldiers at the Polish border, believing her neighbors that they pose no real threat, and dreams instead of the day Tomasz returns from college in Warsaw so they can be married. But little by little, injustice by brutal injustice, the Nazi occupation takes hold, and Alina’s tiny rural village, its families, are divided by fear and hate. Then, as the fabric of their lives is slowly picked apart, Tomasz disappears. Where Alina used to measure time between visits from her beloved, now she measures the spaces between hope and despair, waiting for word from Tomasz and avoiding the attentions of the soldiers who patrol her parents’ farm. But for now, even deafening silence is preferable to grief.

Slipping between Nazi-occupied Poland and the frenetic pace of modern life, Kelly Rimmer creates an emotional and finely wrought narrative that weaves together two women’s stories into a tapestry of perseverance, loyalty, love and honor. The Things We Cannot Say is an unshakable reminder of the devastation when truth is silenced…and how it can take a lifetime to find our voice before we learn to trust it.

“A poetic and unforgettable tale of the past that is always with us, the truth that sets us free, and the long journey home.” —Pam Jenoff, New York Times bestselling author
“It is that rare author that takes the reader so deeply into a world that you smell the smells, feel the hunger, see the devastation. Alina and Tomasz’s story is one of bravery, resilience, and the lengths we will go to for the ones we love.” —Sally Hepworth, New York Times bestselling author
“An intense story of survival, hardship, and heartbreak, The Things We Cannot Say is sure to evoke emotion in even the most cynical reader.” —New York Journal of Books
“If you only have time to read one book this year The Things We Cannot Say should be that book. Keep tissues handy.” — Fresh Fiction
“Rimmer gives each story line the space to develop organically, resulting in concluding chapters that tie the two women’s stories together in an extremely moving fashion…[An] absorbing, emotional tale of love, heartbreak, and resilience.” —Booklist

Kelly Rimmer is a USA Today bestselling author of contemporary and historical fiction and a contemporary romance series. Her novels have been translated into more than twenty languages.