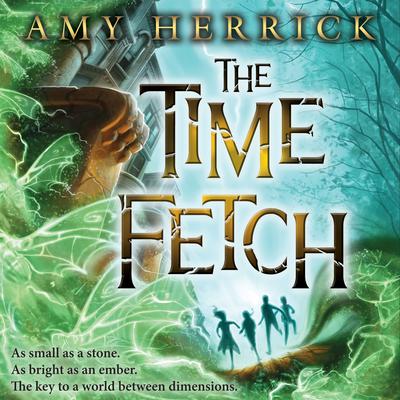 Under normal circumstances, a Time Fetch sends out its foragers to collect only those moments that will never be missed or regretted. It then rests, waiting to be called back by the Keeper, who distributes the gathered time where it is needed in our world and others. When eighth grader Edward innocently mistakes a sleeping Fetch for an ordinary rock, he wakes its foragers too early, and they begin to multiply and gobble up too much time.Soonthe bell rings to end class just as it’s begun. Buses race down streets, toofar behind schedule to stop for passengers. Buildings and sidewalks begin todisappear as the whole fabric of the universe starts to unravel.

To try to stop the time foragers he has unleashed, Edward must depend on thehelp of his classmates Feenix, Danton, and Brigit—whether he likes it or not.They all have touched the Fetch, and it has drawn them together in a strangeand thrilling adventure where the boundaries between worlds and dimensions areblurred, and places and creatures on the other side are much like the onesthey’ve always known—but slightly twisted, a little darker, and much moredangerous.

A fast-paced tale of mythology, danger, friendship, and a shocking centuries-old secret, The Time Fetch is a magical adventure that reveals the extraordinary hiding just inside the ordinary.

“A fast-paced fantasy with great twists and turns that will grab readers from the start.” —Booklist
“Suspenseful, moves at a rapid pace, and is heavily sprinkled with fascinating characters.” —School Library Journal

Amy Herrick is the critically acclaimed author of At the Sign of the Naked Waiter and The Happiness Code. She lives in Brooklyn, New York.