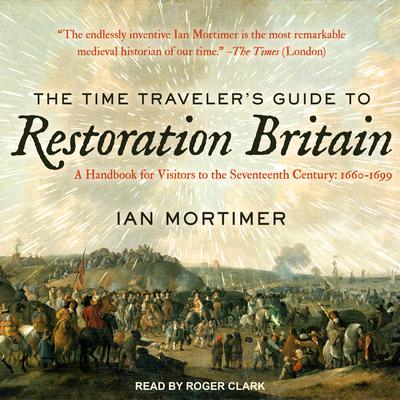 The Time Traveler’s Guide to Restoration Britain: A Handbook for Visitors to the Seventeenth Century: 1660-1699

Imagine you could see the smiles of the people mentioned in Samuel Pepys's diary, hear the shouts of market traders, and touch their wares. How would you find your way around? Where would you stay? What would you wear? Where might you be suspected of witchcraft? Where would you be welcome?

This is an up-close-and-personal look at Britain between the Restoration of King Charles II in 1660 and the end of the century. The last witch is sentenced to death just two years before Isaac Newton's Principia Mathematica, the bedrock of modern science, is published. Religion still has a severe grip on society and yet some—including the king—flout every moral convention they can find. There are great fires in London and Edinburgh; the plague disappears; a global trading empire develops.

Over these four dynamic decades, the last vestiges of medievalism are swept away and replaced by a tremendous cultural flowering. Why are half the people you meet under the age of twenty-one? What is considered rude? And why is dueling so popular? Ian Mortimer delves into the nuances of daily life to paint a vibrant and detailed picture of society at the dawn of the modern world as only he can.