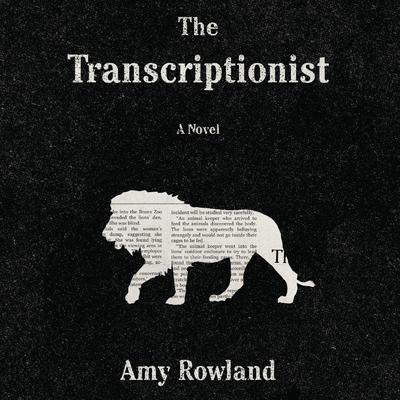 Lena, the transcriptionist, sits alone in a room far away from the hum of the newsroom that is the heart of the Record, the big city newspaper for which she works. For years, she has been the ever-present link for reporters calling in stories from around the world. Hooked up to a machine that turns spoken words to print, Lena is the vein that connects the organs of the paper. She is loyal, she is unquestioning, yet technology is dictating that her days there are numbered. When she reads a shocking piece in the paper about a Jane Doe mauled to death by a lion, she recognizes the woman in the picture. They had met on a bus just a few days before. Obsessed with understanding what caused the woman to deliberately climb into the lion's den, Lena begins a campaign for truth that will destroy the Record's complacency and shake the venerable institution to its very foundation. In doing so she also recovers a life—her own.

“A haunting and provocative novel about the mysteries of life and a death, the written word, things seen and unseen, heard and forgotten. Amy Rowland’s writing is compelling and masterful.” —Delia Ephron, New York Times bestselling author
“The Transcriptionist can be read through many lenses… Rowland plays with the notions of truth and reliability…It is the responsibility of a journalist to report the truth, but what if—Rowland asks—objective reality is a fiction?… Sharp and affecting” —New York Times Book Review
“If one had to name an antecedent for the strange, golden sheen that covers Amy Rowland’s debut novel, possibly early John Cheever, with its dreamy imaginings of commuter intrigues, or beautifully cadenced, resonant verbal exchanges, would be closest. Entering the city Rowland creates, with its tightly strung dialogue and soulful, lonely citizens, is a memorable experience.” —Boston Globe
“Rowland, a former transcriptionist for the New York Times, has written a strange, mesmerizing novel about language, isolation, ethics, technology, and the lack of trust between institutions and the people they purportedly serve…A fine debut novel about the decline of newspapers and the subsequent loss of ­humanity—and yes, these are related.” —Booklist (starred review)
“Sands beautifully captures the odd life of the haunted lead character in Rowland’s novel…Sands gives a quiet, subdued performance that beautifully captures the complex, lonely protagonist. She keeps her characterizations to a minimum. It’s a subtle performance that pulls the listener solidly into Lena’s world. Sands’s performance, like Lena, is mesmerizing in its seeming simplicity. Listeners will discover that these still waters do, indeed, run deep.” —Publishers Weekly, audio review
“Xe Sands’s ironic tone fits Lena, the questioning transcriptionist who begins to wonder about herself and life in general from the isolation of a small room where she types news stories phoned in by reporters from around the world. How can she not when one moment she’s typing a story on a celeb’s wedding and the next an event in a foreign war? Though both Lena’s voice and Sands’s readings are dry, there’s a tone of quiet, growing despair after a blind woman breaks into the Bronx Zoo, where she’s killed by lions. As Lena’s chance encounter with this woman before her death sends her on a course of discovery, Sands’s narration reflects the loneliness and emptiness that inspire her new direction.” —AudioFile
“Rowland expertly covers a lot of ground in this polished and literary first novel, while Xe Sands’ narration effortlessly brings the listener into Lena’s world.” —Library Journal (audio review)
“Unforgettable. Written with such delight, compassion, and humanity it’s newsworthy. Amy Rowland is the debut of the year.” —Alex Gilvarry, author of From the Memoirs of a Non-Enemy Combatant

Amy Rowland is an author whose writing has appeared in The New York Times, The Washington Post, The Christian Science Monitor, and other publications. She lives in Brooklyn and is a staff editor at the New York Times Book Review. The Transcriptionist is her first novel, and she does not know why she hasn't written others by now.