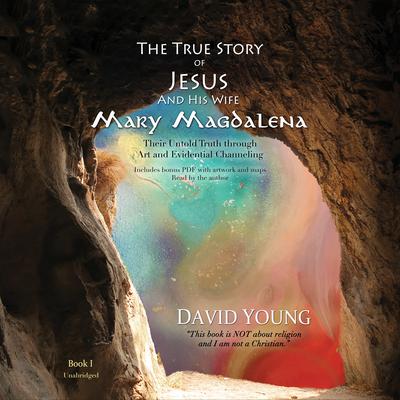 The True Story of Jesus and His Wife Mary Magdalena: Their Untold Truth through Art and Evidential Channeling

The True Story of Jesus and His Wife Mary Magdalena: Book 1

This book is not about religion, and David Young is not a Christian. This story is the result of three years of channeled messages from Jesus and Mary Magdalena that came to Young through incredible synchronicities, his artwork, and inner dialogues, which ultimately guided him toward discovering the hidden truth behind history’s greatest deception.

Jesus and Mary Magdalena’s incredible journey of love, family, and survival is uncovered in this presentation of inspiration and channeled messages. This unconventional book will also soothe and inspire you with David Young’s heavenly music to accompany this breathtaking, mind-expanding story of true historical events.

David Young is a public speaker and teacher of over 350 meditation workshops, a painter who won Best Booth at Art Basel/Spectrum in 2018, and a twice Grammy Award nominated musician. He is also a healer and an evidential channeler. As a musician, he plays two Renaissance flutes at one time in harmony. He has recorded sixty albums and sold over 1,000,000 copies. His music, well known for its soothing sounds and healing properties, is a staple in hospitals, healing centers, and spas throughout the country, including at the Johns Hopkins Medical Centers, which have entire floors that play his music 24/7. It has been estimated that over 300,000 people are treated daily all over the world while listening to his music. He travels throughout the country hosting his signature workshops, A Portal Between Heaven and Earth, which combine his healing music and guided meditations and where countless attendees report out-of-body experiences, past-life regressions, and/or contact with ascended masters and past loved ones.