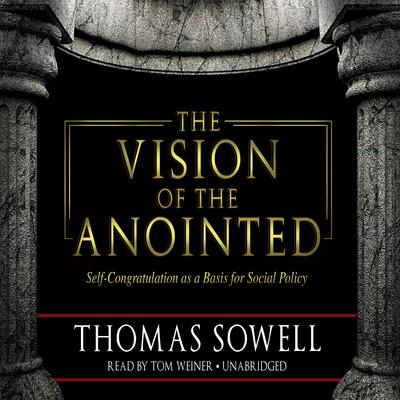 The Vision of the Anointed: Self-Congratulation as a Basis for Social Policy

In this devastating critique of the mindset behind the failed social policies of the past few decades, Thomas Sowell sees what has happened not as a series of isolated mistakes but as a logical consequence of a vision whose defects have led to disasters in education, crime, family disintegration, and more. This is an empirical study in which “politically correct” theory is repeatedly confronted with facts, and the sharp contradictions between the two are explained in terms of a set of self-congratulatory assumptions held by political and intellectual elites. These elites—the anointed—often consider themselves “thinking people,” but this thinking is actually rhetorical assertion, followed by evasions of mounting evidence against these assertions. The vision of the anointed is seen not merely as a failure but as a fatal danger to the values and the future of American society.

“An important and incisive book.” —New York Times Book Review
“As compelling an explanation as any for the seemingly disproportionate amount of condescension and politically correct invective that emanates from the liberal side of the political spectrum toward the conservative opposition.” —Wall Street Journal
“Sowell, a senior fellow at the Hoover Institution, offers some strenuous arguments.” —Publishers Weekly
“Avid conservatives, for whom Sowell is a true-blue intellectual force, will certainly seize upon his analysis for succor.” —Booklist