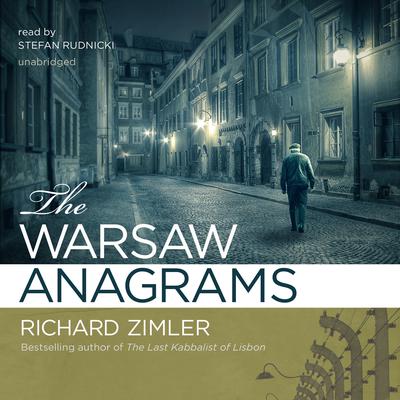 The Warsaw Anagrams: A Novel

Evil will flourish even when good men fight it.

In this gripping and deeply moving mystery thriller set in the Warsaw ghetto of 1941, an exhausted and elderly psychiatrist named Erik Cohen makes his way home to the Jewish ghetto after being interned in a Nazi labor camp. Yet only one visionary man—Heniek Corben—can see him and hear him. Heniek soon realizes that Cohen has become an ibbur—a spirit. But how and why has he taken this form?

Cohen recounts his disturbing and moving story to Heniek—a story of how a beloved great nephew vanished and later turned up as a mutilated corpse. Cohen’s investigation into this terrible death uncovers other ghetto children that have met similar fates and that the killer might be a Jew. As the story progresses, Heniek begins to believe that Cohen is not the secular Jew he claims to be but may, in fact, be a student of the mystical Kabbalah. When Heniek traces his suspicions, he comes to an astonishing conclusion, one that has consequences for his own identity and life—and perhaps for the reader’s as well.

“Richard Zimler’s Warsaw Anagrams is a gripping, heartbreaking, and beautiful thriller set in the darkest depths of Nazi barbarity, but also an unforgettable, poetical, and original journey into the mysteries of evil, decency, and the human heart.” —Simon Sebag Montefiore, New York Times bestselling author of Jerusalem: The Biography and Young Stalin
“An elderly Jewish psychiatrist investigates his grandnephew’s murder in the Warsaw ghetto amid the horrors of the Holocaust.” —Los Angeles Times
“The Warsaw Anagrams is both a fast-moving, very readable mystery novel and a rich, serious book, in which Zimler makes us face the worst and pays tribute to those who died in the Holocaust.” —Independent (London)
“Beautifully written, moving, and disturbing, this packs a powerful, emotional punch.” —Guardian (London)
“Part murder mystery and part historical fiction, Richard Zimler’s latest novel, The Warsaw Anagrams, renews the impact of the large-scale atrocities committed by the Nazis…A thrilling and solemn story that depicts evil in a realistic way.” —Boston Globe
“The highly unusual setting adds tension to the investigation, and Zimler successfully manages to convey the horrors of the Holocaust through the experiences of one family.” —Publishers Weekly
“Stefan Rudnicki delivers the first-person narrative in a deep, versatile voice. As the ghost talks about his investigation into the death of a nephew, listeners will feel his many emotions. These are conveyed as he recounts his memories of such events as his last walk with his nephew and their receipt of fresh lemons to fight scurvy. Both gentle and powerful, Rudnicki’s narration captures the terrors of a strange mystery and a frightening era of history.” —AudioFile
“Zimler builds a riveting mystery around one of the most horrific moments in Jewish history…Moving back and forth in time, Zimler brings the dailiness of life in the ghetto—both its overwhelming horror and claustrophobia and its moments of startling humanity—to vivid, sometimes unbearable life, all in the context of a nightmare version of the classic locked-room mystery. Gripping and deeply disturbing.” —Booklist

Richard Zimler is the award-winning author of several novels, including The Last Kabbalist of Lisbon, winner of the Herodotus Award for Best First Historical Novel, and The Warsaw Anagrams, named the 2010 Book of the Year in Portugal by Ler. His novels have appeared on bestseller lists in twelve countries, including the United States, Great Britain, Portugal, Italy, and Australia. He writes reviews for the Los Angeles Times and the San Francisco Chronicle and lives in Porto, Portugal.