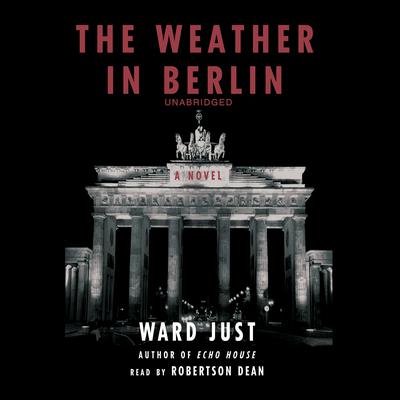 The Weather in Berlin

On a whim, aging director Dixon Greenwood accepted the three-month fellowship in post-wall Berlin, with the promise that nothing would be required of him but an interview about his moviemaking career. Thirty years had passed since he had directed his greatest film, a cult classic called Summer, about a group of German artists between the wars. Now, out of inspiration, in the dark Berlin winter, he sifts through past and present for a new creative direction as he attempts to rediscover his artistic nature. While there, he encounters an actress who disappeared off the set of his film thirty years ago.

Ward Just's intelligent, compelling, and meticulously crafted fiction offers unexpected insights into the psychology of those obsessed with art or political intrigue and faced with circumstances that make pursuit of their passion difficult, if not dire. He further explores ideas about inspiration, memory, and the pull the past can have.

“The Weather in Berlin consistently shows the suppleness of [Ward Just's] sympathies and the breadth of his observations—himself a worthy traveler, a superb American abroad.” —New York Times
“Just has his own inimitable things to say about reawakening a creative life, in an atmospheric novel that’s mysteriously alluring.” —Christian Science Monitor
“Narrator Robertson Dean enhances Ward Just’s subtleties in structure and character development with his impeccable diction and elegant pacing…[His] performance lends a formal grace to Greenwood’s long reflections on Germany’s history, its people, and the necessity for human connection.” —AudioFile
“A symphony of reverie, vivid symbolic statement, and unsparing socio-historical and self-analysis. Just has never done anything better.” —Kirkus Reviews

Ward Just won the James Fenimore Cooper Prize from the Society of American Historians for his novel A Dangerous Friend and was nominated for the National Book Award for Echo House. Just and his wife, Sarah Catchpole, divide their time between Martha’s Vineyard and Europe.