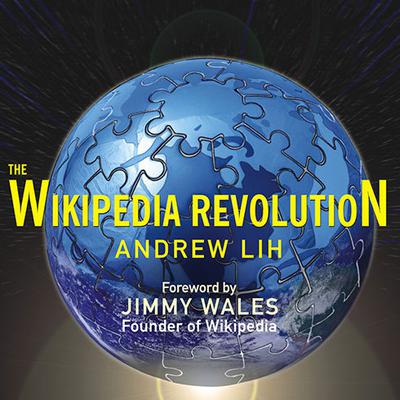 The Wikipedia Revolution: How a Bunch of Nobodies Created the World's Greatest Encyclopedia

"Imagine a world in which every single person on the planet is given free access to the sum of all human knowledge. That's what we're doing." —Jimmy Wales, founder of Wikipedia With more than 2,000,000 individual articles on everything from Aa! (a Japanese pop group) to Zzyzx, California, written by an army of volunteer contributors, Wikipedia is the number-eight site on the World Wide Web. Created (and corrected) by anyone with access to a computer, this impressive assemblage of knowledge is growing at an astonishing rate of more than 30,000,000 words a month. Now, for the first time, a Wikipedia insider tells the story of how it all happened—from the first glimmer of an idea to the global phenomenon it's become. Andrew Lih has been an administrator (a trusted user who is granted access to technical features) at Wikipedia for more than four years, as well as a regular host of the weekly Wikipedia podcast. In The Wikipedia Revolution, he details the site's inception in 2001, its evolution, and its remarkable growth, while also explaining its larger cultural repercussions. Wikipedia is not just a Web site; it's a global community of contributors who have banded together out of a shared passion for making knowledge free. The Wikipedia Revolution features a foreword by Wikipedia founder Jimmy Wales and an afterword that is itself a Wikipedia creation.

“An easy, nontech, intriguing read about a Web miracle that today rivals Encyclopaedia Britannica, according to well-respected publications, in the quality of many of its articles.” —Booklist (starred review)
The [listener] cannot help but become a Wikipedia enthusiast, rooting for the volunteers and lamenting the often public setbacks. —Library Journal
“Tracing Wikipedia’s evolution and expansion to international editions, Lih views the encyclopedia as a ‘global community of passionate scribes,’ attributing its success to a policy of openness which is ‘not so much technical phenomenon as social phenomenon.’” —Publishers Weekly

Andrew Lih spent ten years as an academic in new media and journalism at Columbia University and Hong Kong University. He has been an administrator at Wikipedia for over four years and a commentator on new media, technology, and journalism issues on CNN, MSNBC, and NPR. Lih is based in Beijing.