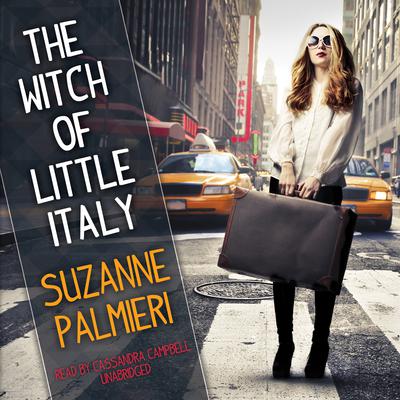 The Witch of Little Italy

A sparkling debut that will make you believe in the power of love, family, and magic

In Suzanne Palmieri's charming novel, The Witch of Little Italy, you will be bewitched by the Amore women. When young Eleanor Amore gets pregnant, she returns home to her estranged family in the Bronx, called by the "Sight" they share, which now grows strong within her. She has only been back once before, when she was ten years old, and while everyone else remembers that summer of sun-drenched beaches, laughter, and cartwheels, Eleanor can't recall anything earlier than the moment she left the house on the last day of her visit.

With her past now coming back to her in flashes, she becomes obsessed with recapturing those memories. Aided by her childhood sweetheart, she learns the secrets still haunting her magical family, secrets buried so deep no one knows how they began. In the process, she unlocks a mystery over fifty years old: The Day the Amores Died, and reveals once and for all a truth that will either heal or shatter the Amore clan.

“Charming and enchanting—The Witch of Little Italy drew me in from page one. A magical story of family, secrets, loss, and rediscovery written in beautiful prose and sprinkled with effervescent characters you won’t soon forget. Palmieri nimbly blends the past and present to concoct a delicious spell of a story that will appeal to fans of Sarah Addison Allen and other fabulously entertaining novels.” —Karen White, New York Times bestselling author
“The Witch of Little Italy is a warmly enchanting debut that will have you believing in magic and craving homemade Bucatini Amatriciana.” —Susanna Kearsley, New York Times bestselling author
“An enchanting debut. Palmieri’s plot makes for a wickedly good read!” —Melissa de la Cruz, New York Times bestselling author
“Palmieri’s enthralling debut will make adult readers nostalgic for beloved books from their childhoods. Abundant with secrets, hidden passageways, magic, and several enchanting mysteries, it’ll keep you on the edge of your seat until the end. The magic and witchcraft elements are subtle, enhancing the overall effect of this clever, beautiful novel.” —RT Book Reviews
“Cassandra Campbell’s narration is magical. She completely disappears into this novel about a young pregnant woman, Eleanor Amore, who seeks refuge in the home of her estranged grandmother and two aunts, who are all ‘witches’—able to see the future and cast spells. Campbell transforms Eleanor from a shy, abused girl with severe, magically caused memory loss into a secure woman who remembers everything—including the powerful secrets of the Amore family…Campbell makes each character’s voice unique while capturing the mystical atmosphere of witchcraft, ghosts, and old secrets.” —AudioFile
“In her debut novel, Palmieri has combined romance and mystery, folklore and psychology to create a jigsaw puzzle of family secrets and tragedies, losses and loves, guilt and forgiveness…Entertaining.” —Kirkus Reviews
“I was utterly enchanted from the first page and found myself continually marveling over the effortless grace with which this story unfolded. The Witch of Little Italy is a complex, richly textured tale that practically sings with magic, and I know Suzanne Palmieri has a long and brilliant career ahead of her. In a word: I was charmed.” —Donna Ball, award-winning author of the Lady Bug Farm series
“The Witch of Little Italy had me spellbound from the very start. Suzanne Palmieri has created a poignant, beautiful tale of love, magic, history, and family where all are deeply connected and interwoven.” —Joanne Rendell, author of The Professors’ Wives’ Club
“A mystical family secret hidden in a spicy Italian stew.” —Kelly Simmons, author of The Bird House

Suzanne Palmieri is coauthor of the novel I’ll Be Seeing You (as Suzanne Hayes), and her essays have been published online in Life Learning Magazine and Full of Crow’s On the Wing section. She lives with her husband and three daughters in New Haven, Connecticut.