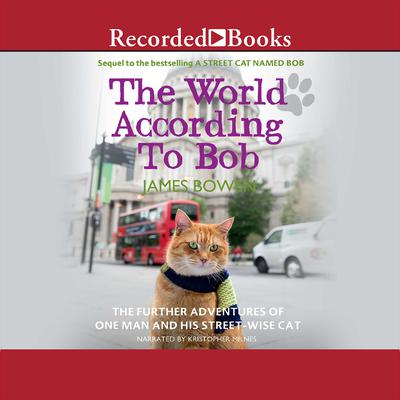 The World According to Bob: The Further Adventures of One Man and His Street-wise Cat

'Since Bob has appeared, I've made huge strides in my life. For more than a decade I was a homeless drug addict. I was lost to the world and had forgotten what was important in life. Now I've got myself back on my two feet, but as I put the past behind me, I'm still stepping unsteadily into the future. I still need help in the right direction. Bob is always there to offer guidance and friendship.' James and his street cat Bob have been on a remarkable journey together. In the years since their story ended in the bestselling A STREET CAT NAMED BOB James, with Bob's help, has begun to find his way back to the real world. Almost every day, Bob provides moments of intelligence, bravery and humour, at the same time opening his human friend's eyes to important truths about friendship, loyalty, trust - and the meaning of happiness. In the continuing tale of their life together James shows the many ways in which Bob has been his protector and guardian angel through times of illness, hardship, even life-threatening danger. As they high five together for their crowds of admirers, James knows that the tricks he's taught Bob are nothing compared to the lessons he's learnt from his street-wise cat.

“Cat lovers expecting a heartwarming account of Bob’s quirky behavior will certainly get that, but Bowen’s focus is on the realities of homelessness…Bowen isn’t looking to shock anyone or paint himself as a martyr. It’s this smartly balanced blend of humor, pathos, and humility that makes Bowen such an engaging narrator…Bowen has crafted a terrific sequel to an amazing and inspiring story that’s just beginning.” —Publishers Weekly (starred review)
“The primary focus in this second installment of the Bob story is the fame and fortune that came Bowen’s way in the wake of the spectacular success of the first book. But is Bob no longer as vital to Bowen’s life? Be serious. Bob’s serenity has kept his now-famous owner grounded and aware of what’s really important in life: the strength of love.” —Booklist (starred review)
“The continuing story of a London busker and his feline friend, Bob…A simple, heartwarming story of continued companionship and mutual trust and respect.” —Kirkus Reviews

James Bowen was a street musician in London who found Bob the Cat in spring 2007 and the pair, now famous around the world, has been inseparable ever since.