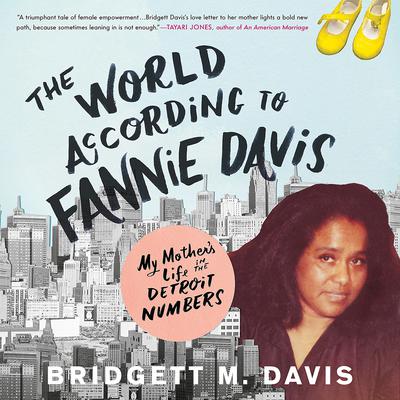 The World according to Fannie Davis: My Mother’s Life in the Detroit Numbers

An O Magazine Pick of New Books of the Month

One of Parade Magazine’s Top Books of the Year

In 1958, the very same year that an unknown songwriter named Berry Gordy borrowed $800 to found Motown Records, a pretty young mother from Nashville, Tennessee borrowed $100 from her brother to run a Numbers racket out of her tattered apartment on Delaware Street, in one of Detroit's worst sections. That woman was Fannie Davis, Bridgett M. Davis' mother. Part bookie, part banker, mother, wife, granddaughter of slaves, Fannie became more than a numbers runner: she was a kind of Ulysses, guiding both her husbands, five children and a grandson through the decimation of a once-proud city using her wit, style, guts, and even gun. She ran her numbers business for 34 years, doing what it took to survive in a legitimate business that just happened to be illegal. She created a loving, joyful home, sent her children to the best schools, bought them the best clothes, mothered them to the highest standard, and when the tragedy of urban life struck, soldiered on with her stated belief: "Dying is easy. Living takes guts."

A daughter's moving homage to an extraordinary parent, The World According to Fannie Davis is also the suspenseful, unforgettable story about the lengths to which a mother will go to "make a way out of no way" to provide a prosperous life for her family -- and how those sacrifices resonate over time. This original, timely, and deeply relatable portrait of one American family is essential reading.

“A panorama of African-American communities in this era, the resolve they demonstrated, and the restrictions put upon them in their pursuit of the American dream. It’s a family story of nationwide scale.” —Entertainment Weekly
“Davis’ book is accessible, her language plain and direct. She has a clear-eyed understanding of what it means to be poor and what kind of opportunities money creates…We need more stories like Fannie’s—the triumph and good life of a lucky black woman in a deeply corrupt world.” —New York Times Book Review
“The author candidly and poignantly transports readers to her formative years in Detroit.” —Essence
“The Davis family story reads like a chapter of the American experience. But theirs is a story usually left out of history books or glossed over with little attention paid to the lives of the people who lived these experiences. This book corrects that omission.” —Christian Science Monitor
“Scintillating.” —Millions.com
"[An] admiring and highly compelling memoir…This outstanding book is a tribute to one woman but will surely speak to the experiences of many. —Kirkus Reviews (starred and featured review)
“Novelist Davis honors her mother in this lively and heartfelt memoir of growing up in the 1960s and ‘70s Detroit…This charming tale of a strong and inspirational woman offers a tantalizing glimpse into the past, savoring the good without sugarcoating the bad.” —Publishers Weekly

Bridgett M. Davis is professor of journalism and the writing professions at Baruch College, City University of New York, where she teaches creative, film, and narrative writing and is director of the Sidney Harman writer-in-residence program. A graduate of Spelman College in Atlanta and Columbia University’s graduate school of journalism, she is the director of the award-winning feature film Naked Acts, as well as the author of two novels, Into the Go-Slow and Shifting Through Neutral.