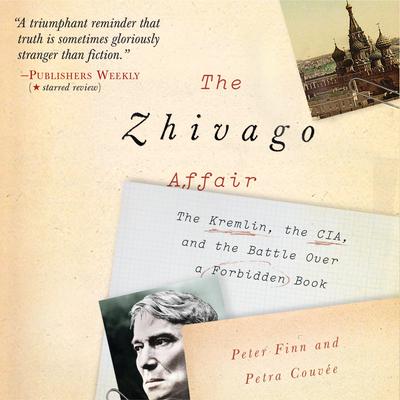 The Zhivago Affair: The Kremlin, the CIA, and the Battle over a Forbidden Book

By Peter Finn and Petra Couvée
Read by Simon Vance

In May of 1956, an Italian publishing scout took a train to the Russian countryside to visit the country’s most beloved poet, Boris Pasternak. He left concealing the original manuscript of Pasternak’s much anticipated first novel, entrusted to him with these words from the author: “This is Doctor Zhivago. May it make its way around the world.” Pasternak knew his novel would never be published in the Soviet Union, where the authorities regarded it as an assault on the 1917 Revolution, so he allowed it to be published in translation all over the world. But in 1958, the CIA, which recognized that the Cold War was above all an ideological battle, published Doctor Zhivago in Russian and smuggled it into the Soviet Union where it was snapped up on the black market and passed surreptitiously from friend to friend. Pasternak, whose funeral in 1960 was attended by thousands of readers who stayed for hours in defiance of the watching KGB, launched the great Soviet tradition of the writer-dissident. With sole access to otherwise classified CIA files, the authors give us an irresistible portrait of the charming and passionate Pasternak and a twisting Cold War thriller that takes us back to a time when literature had power to shape the world.

“Beautifully crafted and scrupulously researched…Finn and Couvée have taken a complex and difficult history with many moving parts and turned it into a kind of intellectual thriller. They have to control a lot of information, yet they keep the book well paced and often exciting. The Zhivago Affair is a prime example of hard work and fidelity to a good story.” —Washington Post
“Fascinating…Told in its entirety, the story of how Doctor Zhivago helped disrupt the Soviet Union holds some intriguing implications for the present and future of cultural conflict.” —Atlantic
“A work of deep historical research that reads a little like le Carré…and it bears its multiple burdens lightly: a sideways biography of Pasternak; a psychological history of Soviet Russia; a powerful argument for the book as literature; an entry into the too-small canon on the CIA’s role in shaping culture. In new reporting on the Agency’s distribution of the book behind enemy lines, the authors show how both sides in the Cold War used literary prestige as a weapon without resorting to cheap moral equivalency.” —New York magazine
“Thrilling…Deftly combining biography, cultural history and literary tittle-tattle, [Finn and Couvée] have shone a light on a shadowy operation…Crushingly poignant.” —Newsday
"[This] riveting, well-researched book reads like a literary thriller…a fascinating essay on mid-century politics…illuminating, humane.” —New Republic
“It is quite simply a remarkable story and fully sourced book, the scholarship peerless but never eclipsing one amazingly humanist story of a towering figure of twentieth century Russian literature.” —New York Journal of Books
“A rich and unanticipated story…[The authors] demonstrate a sophisticated appreciation for an artistic quest that was haunted by dread, persecution, and loss. They also share an avid eye for detail…Finn and Couvée’s poignant depiction of Pasternak is the book’s greatest strength.” —Daily Beast
“A riveting account…[Finn and Couvéee] have drawn not only on archival documents and interviews with surviving actors in the international drama but also on newly declassified files of the Soviet, American, and Dutch intelligence services.” —Bookforum
“This audiobook proves yet again that fact can be as fascinating as fiction, particularly when Simon Vance is the narrator…Vance’s adept use of accent and inflection complement the book, which is as exciting as a spy novel. Calling this a page-turner doesn’t do justice, however, to Vance’s elegant and memorable performance. Winner of the AudioFile Earphones Award.” —AudioFile
“In brisk and thrilling fashion…the authors use rich archival research, including previously classified CIA files, to depict the oppressive political conditions that gave rise to Pasternak’s masterpiece….It’s a story expertly told by Finn and Couvée, who unsparingly present the role played by the Kremlin in persecuting Pasternak and his loved ones, as well as the role of the CIA in using his masterpiece in a game of ideological warfare—overall, a triumphant reminder that truth is sometimes gloriously stranger than fiction.” —Publishers Weekly (starred review)
“A fast-paced political thriller about a book that terrified a nation.” —Kirkus Reviews
“The most detailed account to date of the events that suddenly placed one of Russia’s greatest poets in the center of the struggle between Soviet and Western propaganda machines at the height of the Cold War. Pasternak’s personal courage in the face of this totally incongruous conflict is the quality that emerges most clearly from this well-paced narrative, which is especially commendable for its avoidance of all romantic exaggeration—a quality Pasternak himself strove for in Doctor Zhivago. The book is of great relevance today, when such conflicts seem (but only seem) to have disappeared.” —Richard Pevear, cotranslator of Doctor Zhivago

Peter Finn is National Security Editor for The Washington Post and previously served as the Post’s bureau chief in Moscow.