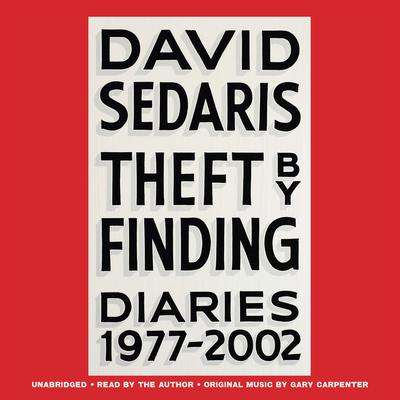 An AudioFile Best Audiobook of the Year for 2017

A Booklist Pick of the Top 10 Biographies on Audio

Longlisted for the Andrew Carnegie Medal for Excellence in Nonfiction

A Boston Globe Pick of Most Anticipated Books of 2017

David Sedaris tells all in a book that is, literally, a lifetime in the making.

For nearly four decades, David Sedaris has faithfully kept a diary in which he records his thoughts and observations on the odd and funny events he witnesses. Anyone who has attended a live Sedaris event knows that his diary readings are often among the most joyful parts of the evening. But never before have they been available in audio. Now, in Theft by Finding, Sedaris brings us his favorite entries. From deeply poignant to laugh-out-loud funny, these selections reveal with new intimacy a man longtime listeners only think they know. Tender, hilarious, illuminating, and endlessly captivating, Theft by Finding offers a rare look into the mind of one of our generation’s greatest comic geniuses.

“Only David Sedaris should narrate books by David Sedaris. He’s simply wonderful…These diary entries are well worth hearing, including an entire entry of ‘uh’s.’ Even his unfinished ramblings are well crafted, and Sedaris is truly a delight to hear…with his inimitable sweetly sarcastic delivery…Winner of the AudioFile Earphones Award.” —AudioFile
“One of the wonderful things about experiencing this book on audio is, of course, Sedaris’ wry and weary delivery. When depicting conversations, he’ll do an accent or impersonation if he knows he can do it well. His brother and father get their own personas, for example, while he quotes others in his own voice. Listening to him mimic an usher at a movie theater or an IHOP waitress highlights what an exquisite observer he is. Vocalizing not just dropped g’s or inventive profanity, Sedaris also captures the pauses and pace that give a great line its punch.” —Booklist (starred audio review)
“A master of incisive and comic cultural criticism…told with his singular sense of humor.” —Harper’s Bazaar
“With eviscerating wit and radiant humanity…Fans will no doubt delight in the entries that will turn into Sedaris’s most beloved essays.” —O, The Oprah Magazine
“Fans will thrill to this opportunity to poke around in the writer’s personal diaries, which he…used as raw material for his hilarious nonfiction as well as his performances.” —Boston Globe
“Though the mood is usually light, the book is also a more serious look into his travails as an artist and person…A surprisingly poignant portrait.” —Kirkus Reviews (starred review)
“A mesmerizing volume…A candid, socially incisive, and sharply amusing chronicle of the evolution of an arresting comedic artist.” —Booklist (starred review)
“Scintillating…Sedaris is a latter-day Charlie Chaplin: droll, put-upon but not innocent, and besieged by all sorts of obstreperous or menacing folks.” —Publishers Weekly (starred review)

David Sedaris is the author of a dozen books, including four that made the #1 New York Times bestsellers list. He is a regular contributor to the New Yorker and BBC Radio 4. In 2019, he was inducted into the American Academy of Arts and Letters. He is the recipient of the Thurber Prize for American Humor, Jonathan Swift International Literature Prize for Satire and Humor, and the Terry Southern Prize for Humor.