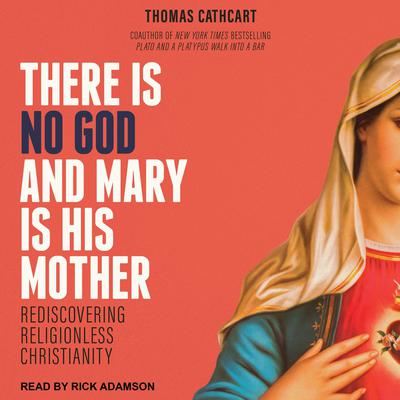 There Is No God and Mary Is His Mother: Rediscovering Religionless Christianity

Is the Western world really post-Christian, or does Christianity simply need a reinterpretation? What did Dietrich Bonhoeffer mean by "religionless Christianity"? Is it passé? Or was it perhaps ahead of its time? In an era of dramatically increased religious pluralism and the emergence of large numbers of people identifying as "spiritual but not religious," so-called "religionless Christianity" can speak to those who find both biblicism and "belief-based" religion irrelevant.

In this personal, witty, and timely book, New York Times bestselling author Thomas Cathcart takes listeners on a journey into belief and unbelief and leads them through to the other side. Drawing from deep philosophical and theological wells, There Is No God and Mary Is His Mother demonstrates the meaningfulness of being a Christian in a secular age. Cathcart shows that, even absent traditional theological formulas and doctrines, Christianity can be a credible, meaningful, and practical means of negotiating worldly existence and experience. For Christians, There Is No God and Mary Is His Mother offers encouragement. For ex-Christians, it presents a different way of being a Christian than the one they've rejected. For atheists, it shows how Christianity can be an ally in affirming the here and now.