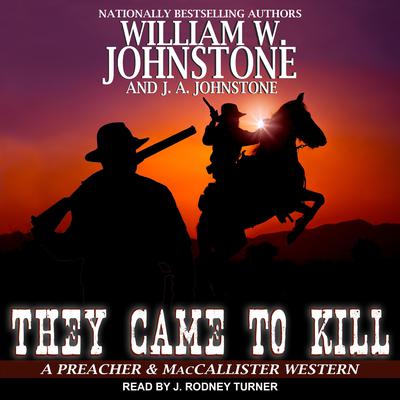 They Came to Kill

By William W. Johnstone  and J. A. Johnstone
Read by J. Rodney Turner

There are some things in this world that can't be stopped. Like progress, a moving train, and the American Dream. When the bigwigs in Washington decide to build a transcontinental railroad to the West Coast, they need a man who's just as unstoppable to clear a path through Mexican territory. That man is Jamie MacCallister. Jamie knows it's a tough job. The territory is overrun with Apaches. The Apaches are gunning for a fight. And the first patrol sent in by the President has already been ambushed, kidnapped, and most likely killed. Jamie knows he can't take on the whole Apache nation by himself. He needs help. He needs back-up.

He needs a non-stop force of mountain-man fury who goes by the name of Preacher . . .