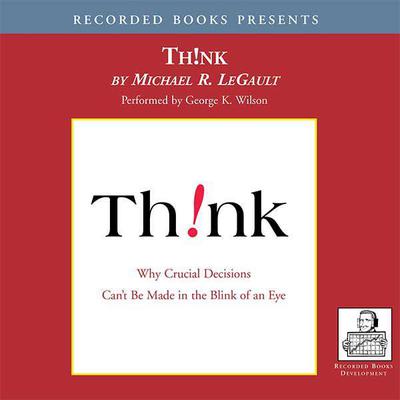 Think!: Why Crucial Decisions Can't Be Made in the Blink of an Eye

Award-winning writer Michael R. LeGault has contributed to such notable periodicals as the Washington Times and the National Post. With gusto he denounces American pop culture, and strikes out at those who would suggest that decisions made on the fly might be the best decisions we ever make. According to LeGault, you have to think carefully before you act. Critical analysis and factual knowledge must be scrutinized before a judgment or course of action can be decided upon.

Michael R. LeGault is an award-winning editor and writer and a former columnist for the Washington Times. His reviews, opinion columns, and features have appeared in newspapers, journals, and magazines across North America. An American citizen based in Toronto, he has worked for and been a consultant to major US companies on health, safety, environmental, and quality issues. He received his BS from the University of Michigan and his MS from the University of Miami, Florida. LeGault is currently an editor at the National Post. He and his wife, Anneli, have two children.