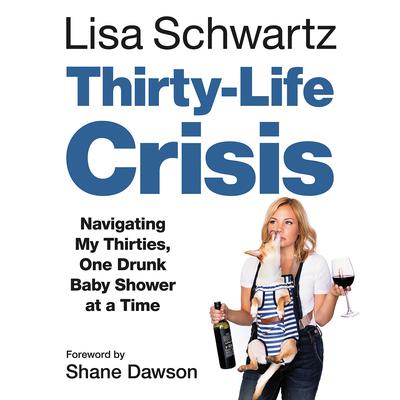 Thirty-Life Crisis: Navigating My Thirties, One Drunk Baby Shower at a Time

A hilarious essay collection perfect for anyone dealing with the challenges, indignities, and celebrations that come with being a thirty-something by actor and YouTube star Lisa Schwartz (Lisbug).

THIRTYLIFE CRISIS Lisa Schwartz's stories and musings are all about watching her friends adult like pros, while she tries to understand why she doesn't want or can't seem to find all the things they have for herself. Like a big sister who's already seen it all, Lisa will take readers through her own life experiences to say that one thing we all need to hear: you are so not alone. Unabashed and unfiltered, Schwartz's voice and candor will appeal to anyone in their thirties who just can't deal with the never-ending Facebook feed of friends' engagement photos and baby pictures, the trials of figuring out where their passion meets their career, and everything in between.

So, if you've ever had to figure out...
This book is your new best friend.

Lisa Schwartz has garnered more than two million unique subscribers and over 395 million views her successful and irreverent YouTube channel, Lisbug. Her most popular video, a parody of Taylor Swift’s “Shake It Off,” generated nineteen million views and received coverage in several outlets, including the Huffington Post. Lisa also starred opposite frequent collaborator Shane Dawson in the feature length comedy Not Cool, which immediately shot to #1 on iTunes and Netflix.