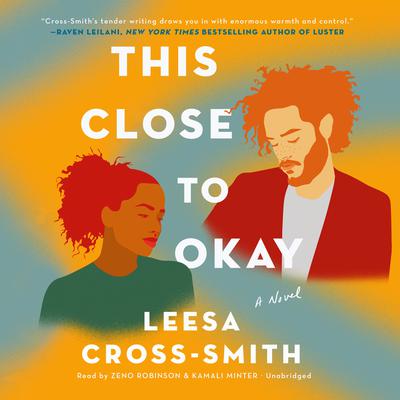 This Close to Okay: A Novel

By Leesa Cross-Smith
Read by Zeno Robinson  and Kamali Minter

A Book-of-the-Month Club Selection of the Month

From the award-winning writer Roxane Gay calls "a consummate storyteller" comes a cathartic novel about the life-changing weekend shared between two strangers.

On a rainy October night in Kentucky, recently divorced therapist Tallie Clark is on her way home when she spots a man precariously standing on the edge of a bridge. Without a second thought, Tallie pulls over and jumps out of the car into the pouring rain. She convinces the man to join her for a cup of coffee, and he eventually agrees to come back to her house, where he finally, reluctantly, shares his first name: Emmett.

Over the course of the emotionally-charged weekend that follows, Tallie makes it her mission to provide a safe and comfortable space for Emmett, although she doesn't confess that she works as a therapist. However, Emmett is not the only one who needs help -- and he has secrets of his own.

Alternating between Tallie and Emmett's perspectives as they inch closer to the truth of what brought Emmett to the bridge, This Close to Okay is an uplifting, powerful story of two strangers brought together by wild chance at the moment they need it the most.

“Both Minter and Robinson succeed at delivering affecting performances.” —AudioFile
“This book hits the ground running. Cross-Smith writes tenderly about the trial and error of intimacy and draws you in with enormous warmth and control.” —Raven Leilani, New York Times bestselling author
“This Close to Okay is such a joy to read! It at once delights and moves, its sweetness and sass and sexiness balanced with deep questions about honesty, intimacy, and heartbreak. Leesa Cross-Smith is a confident storyteller and, in her hands, her characters come alive; they are fallible, charming, complicated, and—like all of us—aching for connection.” —Edan Lepucki, New York Times bestselling author

Leesa Cross-Smith is a homemaker and the author of Every Kiss A War and Whiskey & Ribbons. She lives in Kentucky with her husband and children.