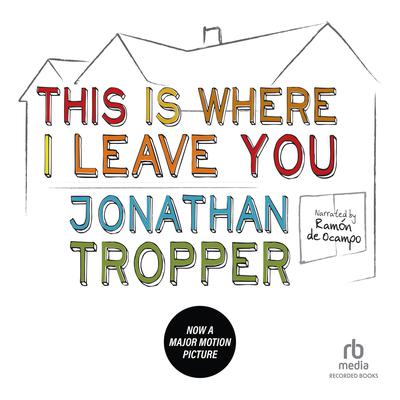 This is Where I Leave You

An Amazon Best Book of the Month, August 2009

Hailed as a "heartfelt family drama/belated coming-of-age story" (Publishers Weekly), This Is Where I Leave You finds Judd Foxman's life in disarray. Shortly after Judd's wife leaves him for his boss, Judd's father Mort passes away, bringing the entire family together in mourning. During this week of "sitting shiva," Judd realizes his siblings are even more dysfunctional than he is, and the confrontations that ensue are full of raw emotion and humorous consequences.

“Smartly comic…In a wry domestic tone nicely akin to Tom Perrotta’s, Mr. Tropper goes on to introduce a darkly entertaining bunch of dysfunctional relatives…Although Mr. Tropper’s dialogue here is fast and fresh, his book also has ballast. The death of a father would seem to provide that automatically, but it takes a while for these characters to shed their flippancy and understand what has hit them.” —New York Times
“[A] magnificently funny family saga…It’s amazing what can happen in the hands of the casually brilliant author…Who knows, maybe the Foxmans live down the street from the Bluths of TV’s Arrested Development? Maybe once they crossed paths at the airport with the Lamberts of Jonathan Franzen’s The Corrections? Certainly they’re traceable on the same Google Map of Dysfunctionville…Read and weep with laughter.” —Entertainment Weekly
“Often hilarious and often heartbreaking…Consistently surprising. Tropper keeps the reader off-balance by changing the allegiances between siblings and spouses, friends and enemies, lovers and losers, and the result is a novel that charms by allowing for messes, loose ends, and the reality that there’s only one sure ending for everyone.” —Los Angeles Times
“Hilarious…The Foxman brothers must become men, though, God knows, they don’t want to. They want to remain hard-punching, dope-smoking, lighthearted pranksters, but life won’t stand for that. Forgiveness, compassion, and compromise are all in the cards for them now that their dad has died. This a beautiful novel about men—their lust and rage and sweetness. Read it—or take it as a gift—when you next go on a dreaded family holiday.” —Washington Post
“A snappy and heartfelt family drama/belated coming-of-age story…The family’s interactions are sharp, raw, and often laugh-out-loud funny, and Judd’s narration is unflinching, occasionally lewd, and very keen. Tropper strikes an excellent balance between the family history and its present-day fallout, proving his ability to create touchingly human characters and a deliciously page-turning story.” —Publishers Weekly
“Ramón de Ocampo gives a subtly nuanced rendering of Jonathan Tropper’s family story…De Ocampo reveals the various characters involved in the family shivah with a degree of variation in tone and voice that doesn’t call attention to itself while delineating identity and gender. Listeners will enjoy the first half of the book for its wit and the second half for its insight.” —AudioFile
“This is a story that could be told by your best guy friend: laugh-out-loud funny, intimate, honest, raunchy, and thoroughly enjoyable. Tropper is spot-on with his observations of family relationships as each member deals with new grief, old resentments, and life’s funny twists of fate. Tropper’s characters are real, flawed, and very likable, making for a great summer read.” —Booklist
“With its frat-house language and sexual obsessions, this hilarious, testosterone-driven thrill-ride comes with all the weaponry at the Foxmans’ disposal: physical blows, verbal darts, psychological barbs, friendly jousts, and loving punches to the solax plexus. And the women have their say as well; there are no neutral corners in this melee. Highly recommended for Tropper fans, who will rejoice at the opportunity to indulge; others will wonder where he’s been all their lives.” —Library Journal
“Few can rival [Tropper’s] poignant depictions of damaged men befuddled by the women they love.” —Kirkus Reviews

Jonathan Tropper is the author of How to Talk to a Widower, Everything Changes, The Book of Joe, Plan B, and This Is Where I Leave You. He lives with his family in Westchester, New York, where he teaches writing at Manhattanville College.