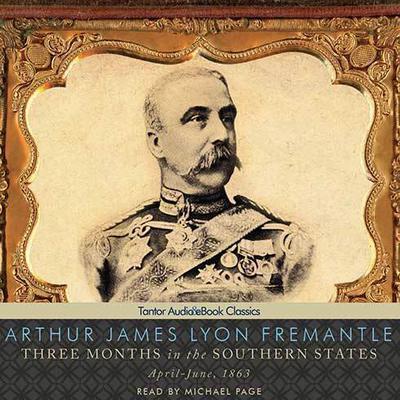 The author of this book, Arthur James Lyon Fremantle, has, perhaps, achieved more renown in recent years than at any time since the publication of his literary efforts. Those familiar with the film Gettysburg will recall the unusual figure of a British Guards officer attired (inaccurately) in his full dress Guardsman's scarlet uniform among the ranks of the Virginians at the famous and pivotal battle. The cinema may have taken its usual liberties, but the character was firmly based in fact and was none other than the Fremantle himself. The British Empire felt no need to come down strongly on either side of the conflict between the States, but its support for the Confederacy was both implicit and occasionally obvious. Fremantle wanted to see the war at first hand and so he traveled to America and accompanied the Confederate forces—actually unglamorously in mufti—in the field. His experiences brought him to the collision of Gettysburg, and history is indebted to Fremantle for the observations of a comparatively impartial military man on these monumental times and events.

“Since 1863 Three Months in the Southern States has enjoyed a reputation as one of the finest of Civil War books.” —Richard Harwell, in his introduction to Two Views of Gettysburg

Arthur James Lyon Fremantle (1835–1901) was a British soldier and a notable British witness to the Battle of Gettysburg during the American Civil War. As captain and lieutenant colonel, he spent three months in North America, traveling through parts of the Confederate States of America and the Union. His book Three Months in the Southern States chronicles his experiences in the American South during this period.