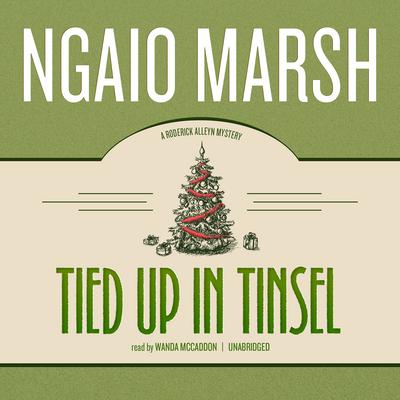 Tied Up in Tinsel

An English manor house on the moors is an ideal setting for a murder—and for one of Ngaio Marsh's classic murder mysteries.

The occasion is a Christmas party hosted by Mr. Hilary Bill-Tasman, landed proprietor of Halberds Manor and authority on antiques. Santa Claus is in attendance, played by a highly unpopular servant. When he goes missing after his performance, foul play is immediately suspected. There are a number of unusual characters attending the festivities, several of whom are perfectly logical candidates for murderer—and one of whom will elude the most prescient listener until tracked down by the indefatigable Inspector Roderick Alleyn, whose wife, Troy, innocently involved him in all these sinister goings-on in the first place.

“It’s time to start comparing Christie to Marsh instead of the other way around.” —New York magazine
“Agreeably effortless telling.” —Guardian (UK)
“One of her best and most baffling mysteries.” —Daily Express (UK)
“So entertaining that I recommend it unreservedly.” —Daily Telegraph (UK)
“Dame Ngaio has yet to write a mystery that is less than perfect.” — Oregonian