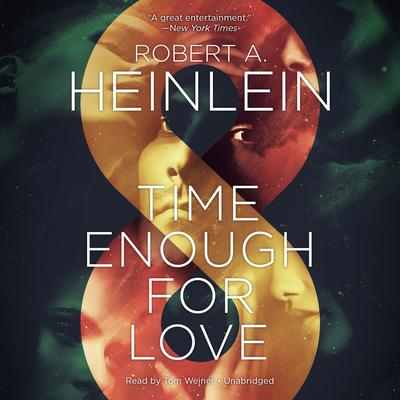 Time Enough for Love: The Lives of Lazarus Long

By Robert A. Heinlein
Read by Tom Weiner

Finalist for the 1974 Hugo Award for Best Novel

Nominated for the 1974 Nebula Award for Best Novel

Nominated for the 1974 Locus Award for Best Science Fiction Novel

Time Enough for Love is the capstone and crowning achievement of Heinlein’s famous Future History series.

Lazarus Long is so in love with life that he simply refuses to die. Born in the early 1900s, he lives through multiple centuries, his love for time ultimately causing him to become his own ancestor. Time Enough for Love is his lovingly detailed account of his journey through a vast and magnificent timescape of centuries and worlds. Using the voice of Lazarus, Heinlein expounds his own philosophies, including his radical ideas on sexual freedom. His use of slang, technical jargon, sharp wit, and clever understatement lend this story a texture and authority that seems the very tone of things to come.

“A great entertainment.” —New York Times
“Time Enough for Love is a full, rich, in some ways towering novel.” —Kansas City Star
“A big novel, an entertaining one, and an important one for science fiction.” —Baltimore Sun
“[Heinlein] has energy, verve, and a genius for making outrageous premises…seem perfectly reasonable.” —Kirkus Reviews (starred review)