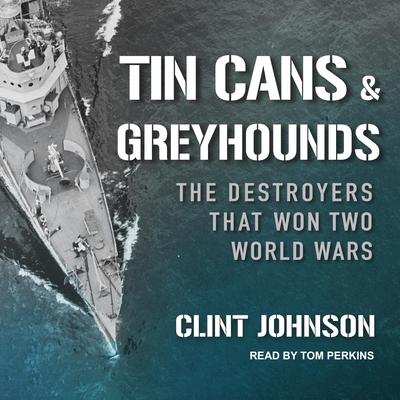 This action-packed narrative history of destroyer-class ships begins with destroyers' first incarnation as torpedo boats in 1898 through the last true combat service of the ships in the Vietnam War. Nicknamed "tin cans" or "greyhounds," destroyers were quick naval ships used to defend larger battleships—and they proved indispensable in America's military victories. In Tin Cans and Greyhounds, author Clint Johnson brings listeners inside the quarter-inch hulls of destroyers to meet the men who manned the ships' five-inch guns and fought America's wars from inside a "tin can"—risking death by cannon shell, shrapnel, bomb, fire, drowning, exposure, and sharks.

Clint Johnson has written a number of books on the Civil War, including the acclaimed Civil War Blunders. Originally from Florida, he counts Confederate soldiers from Florida, Georgia, and Alabama among his ancestors. He is active as a Civil War reenactor and has portrayed soldiers from both the South and the Union. A graduate of the University of Florida, Johnson lives in the mountains of North Carolina with his wife, Barbara.