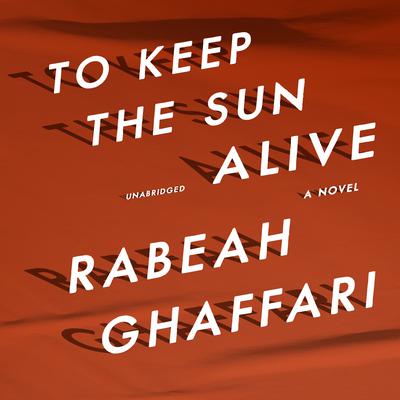 To Keep the Sun Alive: A Novel

A Millions.com Pick of Most Anticipated Books of 2019

A Refinery29 Pick for January

The year is 1979. The Iranian Revolution is just around the corner, as is a once-in-a-lifetime solar eclipse. Meanwhile, in the northeastern city of Naishapur, a retired judge and his wife, Bibi, run an ancient orchard, growing apples, plums, peaches, and sour cherries, and looking after several generations of family members. The days here are marked by long, elaborate lunches on the terrace and arguments about government corruption and the rise of religious fundamentalism, peppered with tales of ancient Persia that foreshadow the seismic political changes to come. And yet life continues.

Bibi, the matriarch, struggles to keep her family together. Her young nephew goes to the university, hoping to lead the fight for a new Iran and marry his childhood sweetheart. Another nephew surrenders to opium, while his father longs for a life in Europe. Her brother-in-law evolves into a powerful Islamic cleric while her husband retreats into intellectual reflection.

Told through a host of vivid, unforgettable characters, ranging from children to servants to friends of the family, To Keep the Sun Alive is the kind of compelling, rich story that not only informs the past, but also reminds us of the human aspirations that animate historical events.

“A mesmerizing novel.” —Woman’s Day magazine
“Richly imagined.” —Southern Living magazine
“An Iranian family saga that reads like a movie.” —Electric Literature
“Ghaffari’s saga is so evocative you’ll nearly be able to smell the orange trees in the family’s orchard.” —Refinery29
“Poetic prose relays deep and intimate emotion in a single line; its richness makes characters’ joys and tragedies palpably felt by readers, too. This is a beautifully written story.” —Booklist (starred review)
“Rabeah Ghaffari narrates her poetic historical novel…[and] gives its multigenerational characters sombre, steady voices…Ghaffari presents both male and female characters well; she makes the rise of religious extremists credible in deep-voiced lines that contrast with the measured tones used to evoke the judge. This is a lush listening experience that fans of literary fiction will sink into as Ghaffari humanizes history.” —AudioFile
“Ghaffari delves into her characters with sensitivity for their positions and differences. Readers will savor the emotional depth of one family’s experience of the terrifying effects of religious fundamentalism and political instability.” —Publishers Weekly
“In her lush and atmospheric debut, author Ghaffari sketches a complex portrait of a country on the brink of revolution and explores the poignant ways political unrest can bind or tear families apart…Evocative and deeply felt.” —Kirkus Reviews
“Ghaffari has built a world so lush, so precise that you will find yourself rewriting history if only to imagine it could still exist.” —Mira Jacob, author of The Sleepwalker’s Guide to Dancing

Rabeah Ghaffari was born in Iran and lives in New York City. She is a film editor and writer, whose collaborative fiction with artist Shirin Neshat was featured in Reflections on Islamic Art, and her documentary, The Troupe, featured Tony Kushner. To Keep the Sun Alive is her first novel.