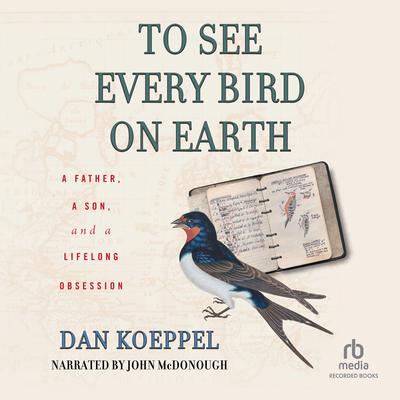 To See Every Bird on Earth: A Father, a Son, and a Lifelong Obsession

Richard Koeppel's obsession began at age twelve, in Queens, New York, when he first spotted a Brown Thrasher, and jotted the sighting in a notebook. Several decades, one failed marriage, and two sons later, he set out to see every bird on earth, becoming a member of a subculture of competitive bird watchers worldwide all pursuing the same goal. Over twenty-five years, he collected over seven thousand species, becoming one of about ten people ever to do so. To See Every Bird on Earth explores the thrill of this chase, a crusade at the expense of all else-for the sake of making a check in a notebook. A riveting glimpse into a fascinating subculture, the book traces the love, loss, and reconnection between a father and son, and explains why birds are so critical to the human search for our place in the world.

“Marvelous. I loved just about everything about this book.”  —Simon Winchester, author of The Professor and the Madman
“A lovingly told story…helps you understand what moves humans to seek escape in seemingly strange other worlds.”  —Stefan Fatsis, author of Word Freak
“As a glimpse into human behavior and family relationships, To See Every Bird on Earth is a rarity: a book about birding that nonbirders will find just as rewarding.”  —Chicago Tribune
“Everyone has his or her addiction, and birdwatching is the drug of choice for the father of author Dan Koeppel, who writes affectionately but honestly about his father’s obsession.”  —Audubon