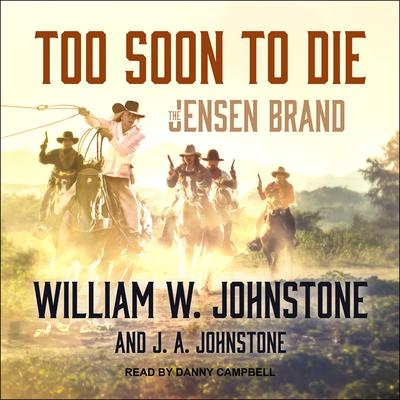 Too Soon to Die

By William W. Johnstone  and J. A. Johnstone
Read by Danny Campbell

With their acclaimed novels of the Jensen family, bestselling authors William W. Johnstone and J. A. Johnstone have captured the pioneering spirit of America itself. Now a new generation of Jensens prepares to take the reins—and live the dream their ancestors fought for . . .

There's nothing like a wedding to bring families together. And there's no place like the Sugarloaf Ranch to throw a foot-stomping hoedown—even if it turns into a gun-blazing showdown. Smoke and Sally Jensen are delighted that their son Louis is marrying the lovely widow he met during a perilous stagecoach journey through the Donner Pass. The whole family welcomes the bride and her young son with open arms.

In fact, everyone is invited to the party—even the handsome stranger who rescued Louis's twin sister Denise from a runaway mustang. Who is this mysterious hero? No one knows. But there's going to be a lot of gunshots along with the wedding bells when this stranger makes his deadly moves. Once more, the Jensens band together to fight for what's theirs. And it just might be till death do they part . . .