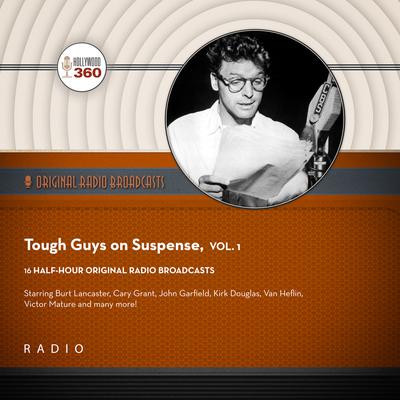 By Black Eye Entertainment
Performed by  a full cast

Suspense … Radio’s Outstanding Theater of Thrills! Suspense mixed mystery, suspicion, and dangerous adventure like no other. Featuring the biggest names in Hollywood, it stirred your nerves to offer you a precarious situation and then withhold the solution … until the last possible moment!

Conceived as a potential radio vehicle for Alfred Hitchcock to direct, Suspense was a radio series of epic proportions. It aired on CBS from 1942 to 1962 and is considered by many to be the best mystery/drama series of the golden age. Known as Radio’s Outstanding Theater of Thrills, it focused on suspenseful stories starring the biggest names in Hollywood. Early in the run, episodes were hosted by the “Man In Black” who, from an omniscient perch, narrated stories of people thrown into dangerous or bizarre situations with plots that usually had an unseen twist or two. Running more than twenty years, Suspense aired nearly one thousand radio broadcasts. It made the transition to television in 1949, but it was much better suited for radio where the theater of the mind could run free. Enjoy sixteen episodes from this incredible mystery series.

“Suspense was a dramatic anthology series, and one of the very best OTR programs, with many episodes still fresh and exciting to listen to today…Indeed, one of the great strengths of the series was its range of subject matter.” —Old Time Radio Review