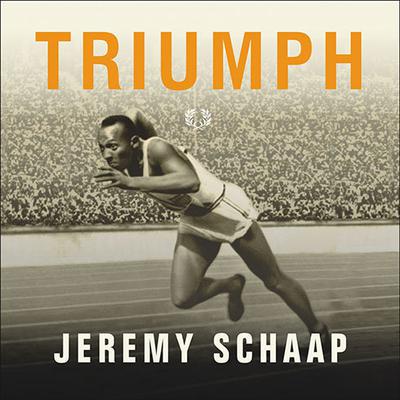 Triumph: The Untold Story of Jesse Owens and Hitler's Olympics

In 1936, against a backdrop of swastikas flying and storm troopers looming, an African American son of sharecroppers set three world records and won an unprecedented four gold medals, single-handedly crushing Hitler's myth of Aryan supremacy. The story of Jesse Owens at the 1936 Olympic Games is that of a high-profile athlete giving a performance that transcends sports. But it is also the intimate and complex tale of the courage of one remarkable man. Drawing on unprecedented access to the Owens family, previously unpublished interviews, and exhaustive archival research, Jeremy Schaap transports us to Nazi Germany to weave this dramatic tale. From the start, American participation in the games was controversial. A boycott, based on reports of Nazi hostility to Jews, was afoot, but it was thwarted by the president of the American Olympic Committee. At the games themselves the plots and intrigues continued: Owens was befriended by a German rival, broad jumper Luz Long, who helped Owens win the gold medal at his own expense. Two Jewish sprinters were, at the last moment, denied the chance to compete for the United States out of misguided politeness to the Nazi hosts. And a myth was born that Hitler himself had snubbed Owens. Like Neal Bascomb's The Perfect Mile and David Margolick's Beyond Glory, Triumph captures this momentous episode in sports, and world, history in a nuanced yet page-turning narrative full of drama, suspense, and color.

Jeremy Schaap is an American sportswriter, television reporter, and author. Schaap is a six-time Emmy award winner for his work on ESPN’s E:60, SportsCenter and Outside the Lines. He is a regular contributor to Nightline and ABC World News Tonight and has been published in Sports Illustrated, ESPN the Magazine, Time, Parade, the Wall Street Journal and the New York Times. A native and resident of New York City, Schaap is the author of Cinderella Man: James J. Braddock, Max Baer, and the Greatest Upset in Boxing History, a New York Times bestseller, and Triumph: The Untold Story of Jesse Owens and Hitler’s Olympics.