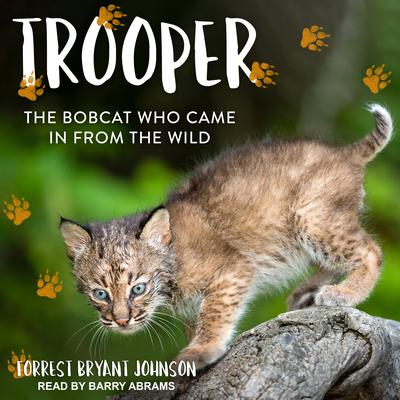 Trooper: The Bobcat Who Came in from the Wild

Whenever middle-aged desert tour guide Forrest Bryant Johnson went out on his daily walks into the Mojave, all was usually peaceful and serene. But one beautiful summer day in 1987, Forrest heard a cry of distress. Following the cries, he came upon a small bobcat kitten, injured, orphaned, and desperately in need of help. So Forrest took his new feline friend home for a night. But when the little "trooper" clearly needed some more time to recoup, that night turned into two nights, a week, and eventually nineteen years. And so Trooper became a part of the Johnson family.

And in those nineteen years, Trooper lived his nine lives to the fullest. He explored desert flora and fauna around him, befriending kit foxes, jackrabbits, desert tortoises, and other creatures and getting into mischief along the way. Trooper became a "big brother" to stray tabby Little Brother, teaching, guiding, and protecting Brother on the pair's adventures and misadventures. He became a beloved patient at his local vet, and cherished housemate of Forrest's wife, Chi. And Trooper even managed to melt the icy heart of a tough guy neighbor. But most of all, throughout his nineteen years, Trooper became Forrest's best friend, as the two shared each other's worries and frustrations, musings and rants, joys and laughter.

“Johnson’s warm and friendly prose keeps the reader involved in the day-to-day interactions between human and animal as well as the exciting encounters that desert life provides. Trooper will be of special interest to those who research interspecies communication and to those who esteem and value our animal companions on the planet we share.” —Brad and Sherry Steiger, authors of Cat Miracles and Animal Miracles
“Johnson’s accounts of the touching and wondrous tale of Trooper are like having an animal-loving friend explain why we are so in awe of cats—wild and domestic—and other animals . . . That we could all have such animals in our lives to teach, guide, and, in their own way, love us.” —Patricia Barnes-Svarney and Thomas Svarney, authors of The Handy Biology Answer Book
“Heartbreaking, warm, beautiful, and emotional, this story didn’t just tug on my heart; it stole it. A must-read for any cat, or indeed animal, lover.” —Rachel Wells, author of A Cat Called Alfie

Forrest Bryant Johnson served nine years with the U.S. Army, rising to the rank of Captain. Johnson is an experienced explorer and a professional at conducting scenic desert tours. He reports with authority and full knowledge on all the animals who must survive in the harsh environment of the Mojave Desert.