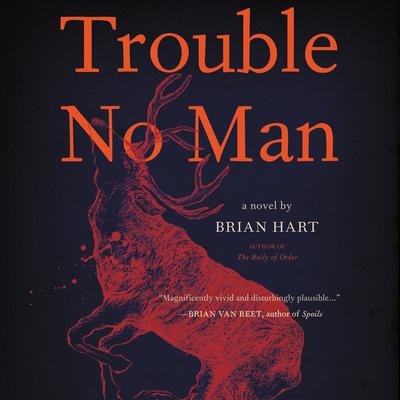 Trouble No Man: A Novel

American War meets Into the Wild in Brian Hart’s epic saga of one man’s struggle to survive a hostile world—tracing his path from a self-destructive, skateboarding youth in the 90s to the near future as he journeys across a desolate, militia-controlled American West to find his missing family—perfect for fans of Edan Lepuki and Cormac McCarthy.

In the America of a near future, northern California and the Pacific Northwest have become a desolate wasteland controlled by violent separatist militias and marked by a lack of water and fuel. In a village outside Reno, a middle-aged man visits an undertaker and gathers the ashes of his dead wife to bring to Alaska. There, their children await them—refugees from the destruction of the south. To reach his only remaining family, the man must cross the treacherous, violent landscape north by bike, his dog his only companion.

Thirty years earlier, we meet Roy Bingham. After a rough-and-tumble childhood, Roy is numbing himself with skateboarding, drugs, and sex, when he meets Karen. Sassy, soulful, and arresting, Karen pulls Roy into her orbit until she decides to give up their nomadic lifestyle to put down roots in her hometown of Loyalton, California. Roy’s fidelity buckles under the commitment and after a boozy night in Reno he leaves Karen for the road and skateboarding.

Flashing back and forth in time across four decades in the life of a man who is lost even when he’s found, Trouble No Man delivers a resonant story of survival, violence, and family, set against the tumult of an America on the precipice of becoming an unfree nation.

“Dystopian thrillers can be conversational gold in book-group settings, and this one offers story-driving humanity that refuses to take a back seat to the well-crafted neo-western setting.” —Booklist (starred review)

A native of Idaho, Brian Hart won the Keener Prize for Literature from the University of Texas at Austin and received an MFA from the Michener Center for Writers there. He is the author of the novel Then Came the Evening. His second novel, The Bully of Order, was a finalist for the Chautauqua Prize. He lives in Idaho with his wife and daughter.