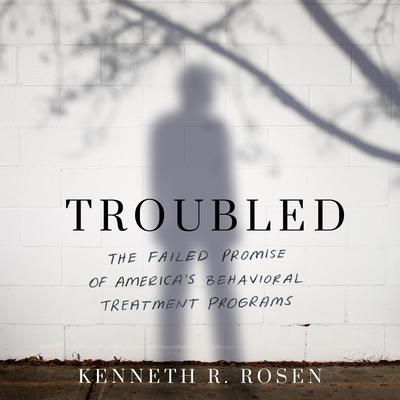 Newsweek Pick of Most Anticipated Books of 2021

Vol.1 Brooklyn Pick of Best Books of the Month

An award-winning journalist’s breathtaking mosaic of the tough-love industry and the young adults it inevitably fails.

In the middle of the night, they are vanished.

Each year thousands of young adults deemed out of control—suffering from depression, addiction, anxiety, and rage—are carted off against their will to remote wilderness programs and treatment facilities across the country. Desperate parents of these “troubled teens” fear it’s their only option. The private, largely unregulated behavioral boot camps break their children down, a damnation the children suffer forever.

Acclaimed journalist Kenneth R. Rosen knows firsthand the brutal emotional, physical, and sexual abuse carried out at these programs. He lived it. In Troubled, Rosen unspools the stories of four graduates on their own scarred journeys through the programs into adulthood. Based on three years of reporting and more than one hundred interviews with other clients, their parents, psychologists, and health-care professionals, Troubled combines harrowing storytelling with investigative journalism to expose the disturbing truth about the massively profitable, sometimes fatal, grossly unchecked redirection industry.

Not without hope, Troubled ultimately delivers an emotional, crucial tapestry of coming of age, neglect, exploitation, trauma, and fraught redemption.

“A searing exposé.” —New York Times Book Review
“[A] brutally frank exposé of America’s ‘tough love’ programs.” —Newsweek
“Not just a work of extended empathy but a public service.” —New York Times
“Highly charged personal stories coalesce into a frank disclosure about the ‘forced redirection of wayward teenagers.’” —Kirkus Reviews
A New York Times “Book to Watch For” —
Next Big Idea Book Club Finalist —
Vol.1 Brooklyn Book of the Month —
Rosen takes impressive steps to mitigate his admitted biases. Rather than turn Troubled into a Boy, Interrupted-style memoir, he focuses on four other graduates of tough-love programs, using their stories as windows into three very different types of facility. Rosen says he approached dozens of former participants before finding people who were willing to open up, and he spent a number of years with each of them to understand them better. This alone turns Troubled into not just a work of extended empathy but a public service; these life stories, taken together, shine a light on an industry that has been able to thrive in darkness. —The New York Times
Newsweek’s own Rosen draws on his own experience and more than 100 interviews in this brutally frank expose of America’s ‘tough love’ programs, following four graduates on their journey to adulthood and revealing the disturbing truth about the redirection industry. —Newsweek
His narrative—anchored by four young adults sent to similar ‘tough love’ environments—shows that many programs inflict lasting damage on the people they claim to help. Ultimately, the book makes a strong case for reforming the practice. —The New York Times
The stories are enlightening and engaging even as they reveal the shady, often abusive tactics used to snap these troubled children into behaving in a way that society deems acceptable. This book is a necessary exposé for any parent who has considered sending their child to one of these camps. Rosen also gives voice to the thousands who have gone through these programs, and the text should be helpful in encouraging them to speak out about their experiences…Highly charged personal stories coalesce into a frank disclosure about the ‘forced redirection of wayward teenagers.’ —Kirkus Reviews
Kenneth Rosen visits the podcast to discuss his new book, Troubled: The Failed Promise of America’s Behavioral Treatment Programs. The book is an examination of the ‘tough-love industry’ of wilderness camps and residential therapeutic programs for young people. Rosen himself, as a troubled teen, spent time at a few of these places, and his book strongly criticizes their methods. —The New York Times
Journalist Kenneth Rosen drew on personal experiences to write this investigative work of nonfiction. Troubled exposes the cycles of abuse and manipulation deployed at wilderness camps to reform ‘troubled teens,’ many of whom are living with mental illness. —Bustle
Rosen experienced a few of the tough-love institutes that he writes about in this searing exposé: wilderness camps and therapeutic programs that treat young substance abusers and troublemakers, largely unregulated. —The New York Times
In Troubled, Kenneth R. Rosen is the exact right Conrad to take us into the heart of this immense darkness. Rosen’s insight, rigor, and sympathy ensure this book will stand as the definitive treatment of this troubled, troubling industry. An experience you won’t forget. —Darin Strauss, author of Half a Life and The Queen of Tuesday
Troubled is a searing chronicle of the unfortunate era of ‘tough love’ programs for wayward American youth, told with detail and compassion, as well as an eloquent kind of well-merited rage. —Luke Mogelson, contributing writer at the New Yorker
Troubled by Kenneth R. Rosen is the first book written by a survivor to investigate the longer-term outcomes of adolescents who were subjected to this ‘treatment’…If you are a parent considering seeking help for your teenager or a program survivor, I urge you to read this book and heed its lessons. —Maia Szalavitz, author of Help at Any Cost
Profoundly unsettling, Troubled reveals a tough-love industry in disarray. Kenneth R. Rosen combines brilliant reporting skills and brutal firsthand experience in this captivating read. —Michael Harris, author of Solitude and The End of Absence
Kenneth R. Rosen is a relentless reporter, and he provides a piercing view inside the disturbing, largely unregulated teen-rehabilitation industry. Rosen ensures you ask the question of what we’re doing to our nation’s children and who, and what, is in fact ‘troubled.’ —Sylvia A. Harvey, author of The Shadow System
A vivid and eye-opening plea for reform. Rosen writes as a journalist, but also from personal experience, about getting ‘kidnapped’ to live in the strange world of teenage behavioral boot camps—which is an industry in America with its own unsavory logic. —Michael Scott Moore, author of The Desert and the Sea
Troubled investigates the unregulated Wild West of programs that claim to treat delinquent teenagers but actually further traumatize and harm them. From wilderness programs to residential treatment centers, these institutions prey on desperate parents who believe their children can be scared straight. Kenneth Rosen’s heartbreaking, deeply reported book should be required reading for parents, therapists, educators, school consultants, and anyone concerned about the most vulnerable in our society: our children. Troubled follows four teens through four different programs, keenly documenting the resultant physical and mental abuse from those entrusted with their care. With a journalist’s eye and a former troubled teen’s heart, Rosen makes a powerful case for eliminating this cruel part of the school-to-prison pipeline. A powerful, revealing expose. —Katherine Reynolds Lewis, author of The Good News About Bad Behavior

Kenneth R. Rosen is the author of Bulletproof Vest and Troubled. He has written for the New Yorker, the New York Times Magazine, VQR, and the Atlantic, and he is a contributing writer at Wired. He spent six years at the New York Times, his hometown newspaper, and now divides his time between northern Italy and Massachusetts. For more information, visit www.kennethrrosen.com.